UK volleyball sweeps Louisville in Battle of the Bluegrass 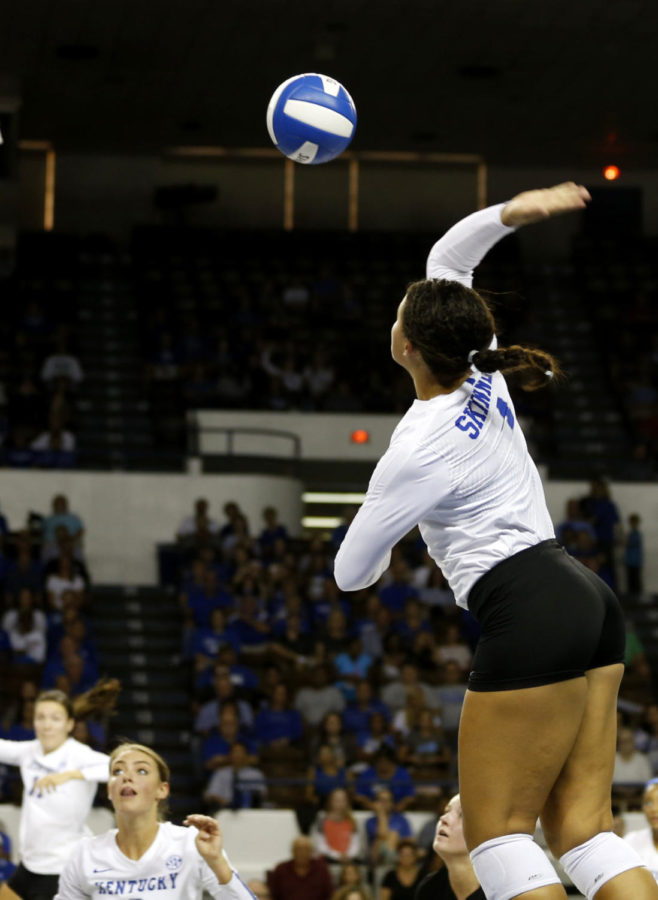 The Cats’ teamwork and ability to be effective on both ends of the floor was a key element in tonight’s win.

The Cards silenced the centerpiece of Kentucky’s team, Leah Edmond, but freshman Avery Skinner was not afraid to showcase her talent tonight.

She got off to a great start in the first set with seven kills posted, and she carried that unstoppable energy throughout the match. Skinner finished with 15 kills, leading the team.

Madison Lilley set up many of Skinner’s kills, as she posted 29 assists. Lilley’s performance opened the middle of the floor and allowed terminations at the net to be made by Skinner.

“Madison did a great job just spreading out the offense, setting the middles a lot and then pushing out to the outside, leaving me with open blocks,” Skinner said.

On the other end of the floor, blocks were definitely a highlight for the Cats and big blocks were performed together by Kaz Brown and Brooke Morgan.

“When you’re hitting against Brooke or I it’s kind of pick your poison, we’ve been playing together for a long time so there’s chemistry between Brooke and I,” Brown said.

Emily Franklin also finished big at the net tonight as she recorded seven blocks for the Cats. The Cats’ defense made a huge impact, as they were able to keep the ball alive on some difficult plays.

Leading the team in digs was Ashley Dusek, who posted 16 digs for her team.

“Ashley is one of the best libero’s in the country, so when you have a player like that on the floor it makes a difference. She’s very organized, great communicator and it makes a big impact,” head coach Craig Skinner said.

Dusek was effective all over the floor for the Cats. Her leadership showed through encouraging her teammates and keeping the positive momentum flowing for this team.

This win for Kentucky extended their record to 8-2 and keeps their winning streak over the arch-rival Louisville alive.

The next match-up for the No.12 Cats is Sept. 16 at 6 p.m. against Kennesaw State. The game will be held in Memorial Coliseum.