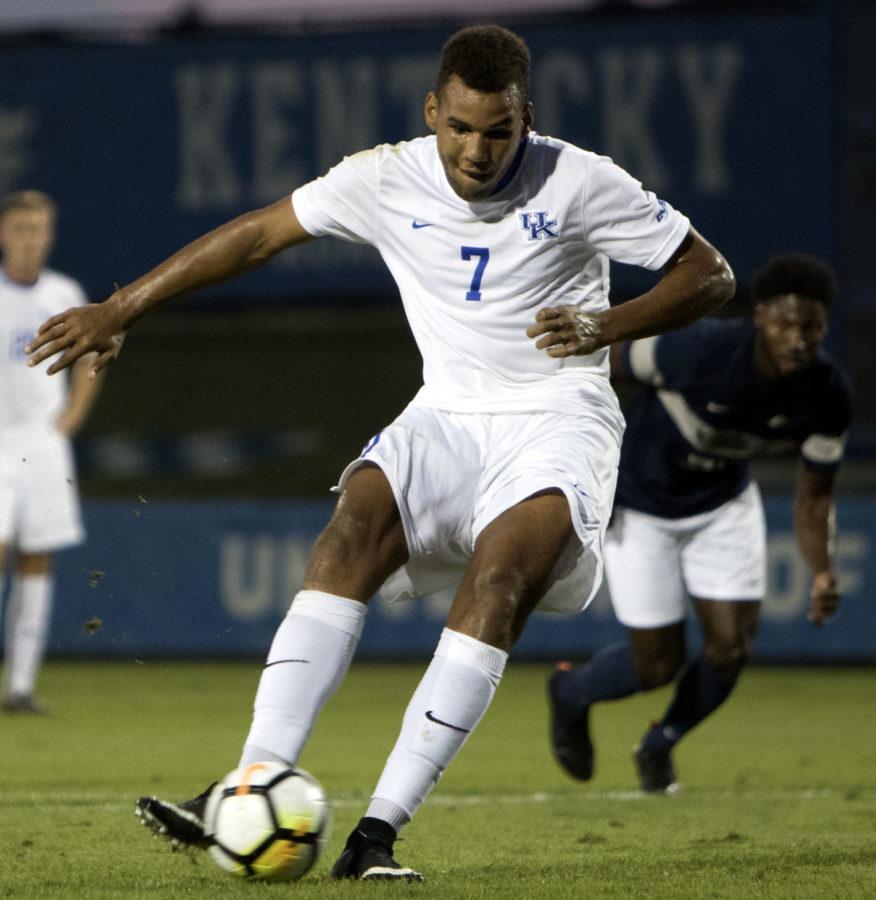 Two overtimes were not enough for Kentucky to break a 1-1 tie with Xavier last week. Sunday afternoon presented the Cats with a chance for redemption. The No. 15 Cats beat the Florida Atlantic University Owls 4-0 as fans at The Bell cheered on.

This game marks the third win in a row for Kentucky against FAU. The team is now 4-0 all-time against the Owls at The Bell and 3-0 in conference play this year.

As soon as the game began, a sense of aggression and physicality was established as Owls defender Rafael Arcila received a yellow card 21 seconds into the match. Veteran midfielder Noah Hutchins tried to thread a free kick to the goal, but keeper Luis Aranzazu was there for the stop.

Both offenses were pushing themselves to the limit to try and put points on the board. UK’s Enrique Facusse saved a kick by FAU defender Matt McLennon in the 11th minute for his only save of the half. Kentucky immediately tried to respond, and Sam Stockton had a solid look for a kick in the 14th that he missed high.

The overall theme of aggressiveness continued as UK’s Tanner Hummel was tangled up near the box just minutes later. FAU had 8 fouls in the half, while UK had 7.

After constantly pressuring opposing territory, the Cats finally marked their presence on the scoreboard. In the 32nd minute, JJ Williams scored a goal as he was assisted by Hummel to put Kentucky up 1-0. Hummel whipped the ball into the box as Williams finished the job for his second goal this year, and his second match in a row with a score.

“Being on the stat sheet is great, but it never would have been possible without my teammates”, Williams said. “They’re in the ones that put me in the position, and I just have to finish.”

The Owls’ woes continued as they failed to capitalize on the few opportunities they had. FAU’s leading scorer, Carlos Sanchis, missed a free kick that could have turned the tide of the match.

The second half opened with more aggression and hard-hitting as Owls forward Dylan Huber received a yellow card in the 56th minute. Kentucky tried to show they were not swayed as Connor Probert kicked the ball into the goal off of an Andrew McKelvey assist. The play was negated, however, due to an offside call.

The Cats made up for the mishap in the 64th minute as senior captain Landon Souder scored his first goal of the year with a header in the box off of an assist by Mikkel Pedersen from the corner to make it 2-0. The offensive assault would continue 10 minutes later as Hutchins scored off on a Williams assist for his first score of the year to make it 3-0.

“Scoring is cool, but being a leader goes beyond statistics. Having a vocal presence and being there for the team is more important”, Hutchins said.

To put the icing on the cake, Stefan Stojkovic scored a last-second goal as he ran the ball to the goal with one second left off of a Williams assist. FAU’s largest attempt at a comeback came in the form of back-to-back misses by Sanchis in the 82nd as Kentucky sealed the deal.

The 6-1-2 Wildcats will hit the road to take on Old Dominion University Saturday, Sept. 30 at 7 p.m.