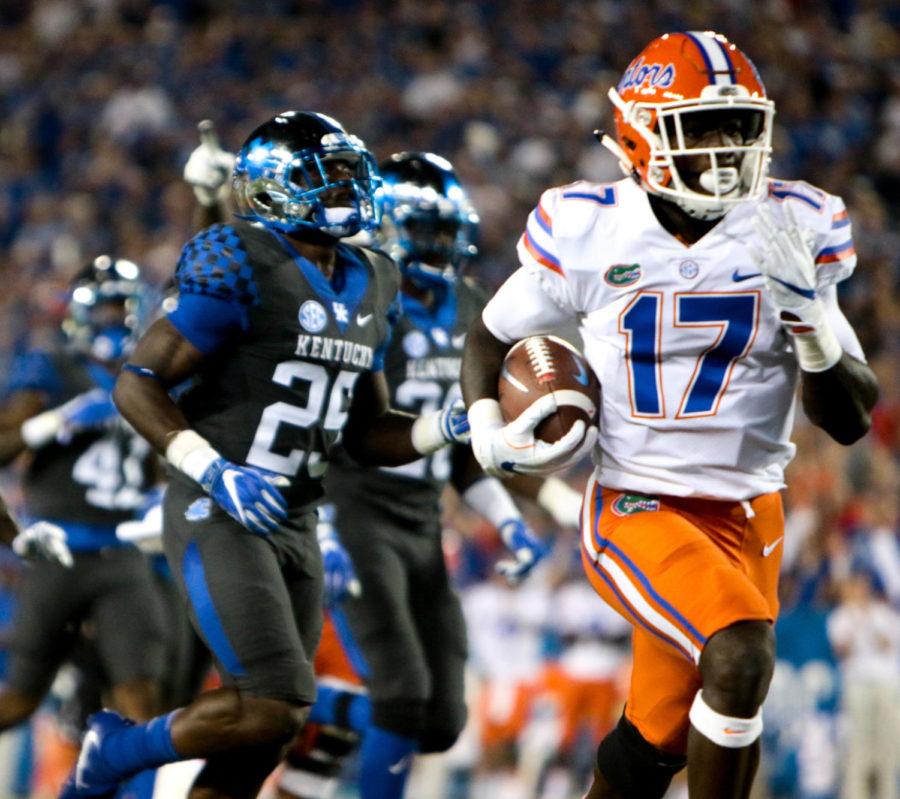 Florida quarterback Kadarius Toney scores a touchdown during the game against Florida on Saturday, Sept. 23, 2017 in Lexington, Kentucky. Kentucky was defeated 28 to 27. Photo by Arden Barnes | Staff

Heartbreak again for Kentucky. After going toe-to-toe with the Florida Gators throughout the game, the Kentucky Wildcats fell short for the 31st straight time.

It’s been a long 30 years for the Wildcats. Kentucky hasn’t beaten Florida since 1986. With a close final score of 28-27, the Gators continued the now 31-0 game win streak they have over Kentucky.

Kicking things off, Kentucky ended the first quarter up 7-0 after a 14-yard touchdown pass from Stephen Johnson to Blake Bone. The game remained steady throughout the first half, going into halftime in a 14-14 tie.

It was a great first half for Stephen Johnson as he had 100 passing yards, two touchdowns and only four incomplete passes. His efficiency helped put the Cats in position to win. Johnson would go onto finish the game with 176 passing yards and three touchdowns.

Florida was led by quarterback Feleipe Franks who threw for 170 yards and two touchdowns. Franks lead receiver of the game was Tyrie Cleveland, who had four catches for 110 yards and a touchdown. Those two, along with their defense that sacked Kentucky four times, remained tough and barely held on to stop the Wildcats at Kroger Field.

One of the standout players of the game for Kentucky was their backup running back Sihiem King. King rushed for 64 yards on four attempts, averaging almost 20 yards a carry.  He also had one reception for 24 yards on a trick play with the pass coming from freshman wide receiver Lynn Bowden Jr.  King’s breakout game played a crucial role in Kentucky coming close to end that 30-plus game losing streak.

In a second half that was mainly dominated by Kentucky, they showed just how good they were on both sides of the ball. Scoring 10 points in the third quarter, the Cats began pulling away. After a touchdown caught by tight end CJ Conrad and a field goal, Kentucky was up 24-14 going into the fourth quarter.

Outscoring Kentucky 14-3 in the last period, the Gators were able to edge out Kentucky, scoring their final touchdown in the last minute.

After this loss, Kentucky is now 3-1 and 1-1 in conference play.  The Wildcats are now second in the SEC East.  After a rough weekend, Kentucky now has to focus on their next game against Eastern Michigan next Saturday, Sept. 30 at Kroger Field in Lexington, Kentucky.