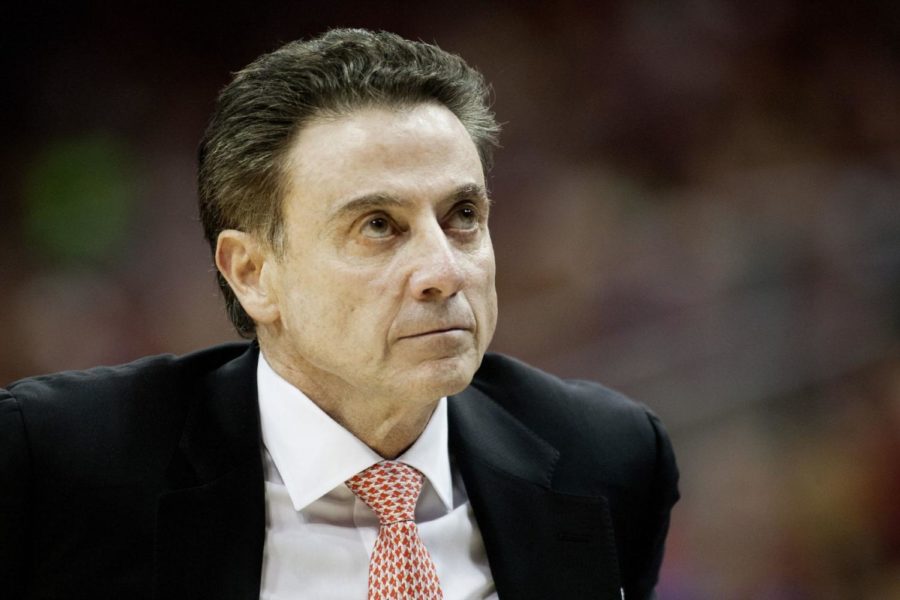 University of Louisville Head Coach Rick Pitino asked fans to support the team in the final games of the season. Photo by Michael Reaves

In the wake of the announcement Tuesday of a two-year ongoing investigation by the FBI into illegal recruitment in college, University of Louisville head coach Rick Pitino and athletics director Tom Jurich have been placed on administrative leave, announced Wednesday by the university.

“It is not a dismissal from a permanent position,” Postel said.

After the national recruiting scandal involving payment embezzlement from Adidas to top high school basketball prospects was uncovered, Louisville was implied in court documents as one of the many schools involved in the scandal.

Louisville’s involvement with the infraction was with a recruit the Cardinals gained over the summer, who many presume to be five-star recruit Brian Bowen, only detailed in court documents as “Player-10”. The University of Louisville was denoted only as a public research university in Kentucky named “University-6,” but the school confirmed their involvement later that day.

Postel also stated that an unnamed player has been suspended indefinitely in his press conference Wednesday.

Per the Federal Bureau of Investigation, Player-10’s family was paid $100,000 to secure his commitment to University-6 this past summer, days before Brian Bowen committed to Louisville on June 3.

This is the second serious recruiting infraction Louisville has dealt with this year, as this summer, the NCAA’s Committee of Infractions detailed the punishments for illegal recruiting practices involving prostitution at Louisville.

Pitino has been the head coach of Louisville since 2001, and coached the Cardinals to a 416-141 (.747) record over 16 seasons. He coached the team to a national title in 2013, however, the championship may be vacated due to ineligible recruits on the team at that time.

His original contract had him in place through the 2025-26 season, and he was set to be suspended five games due to Louisville’s first recruiting infraction. There is also a clause in Pitino’s contract that states that he cannot be fully dismissed from his position without at least a ten-day notice.

The university will announce an interim head coach and athletics director within the next 48 hours. Pitino’s permanent fate with Louisville will be decided by the university’s athletic department at an unnamed time, while Jurich’s rests with the Board of Trustees.

For the last 20 years, I have dedicated my life to the University of Louisville. Disappointment does not even come close to describing my feelings surrounding the allegation that any member of the UofL basketball staff could be involved in the criminal conduct announced yesterday.  My intent has always been to run every athletic program at the University in an honest and compliant manner.  It is heartbreaking to me that the alleged intentional and secret criminal acts can bring such harm to our school.  I love this University, the Louisville community and all of our fans. I plan to continue to help UofL overcome the challenges it faces and work cooperatively with the University with the support of the UofL Board of Trustees following their meeting on October 19th.