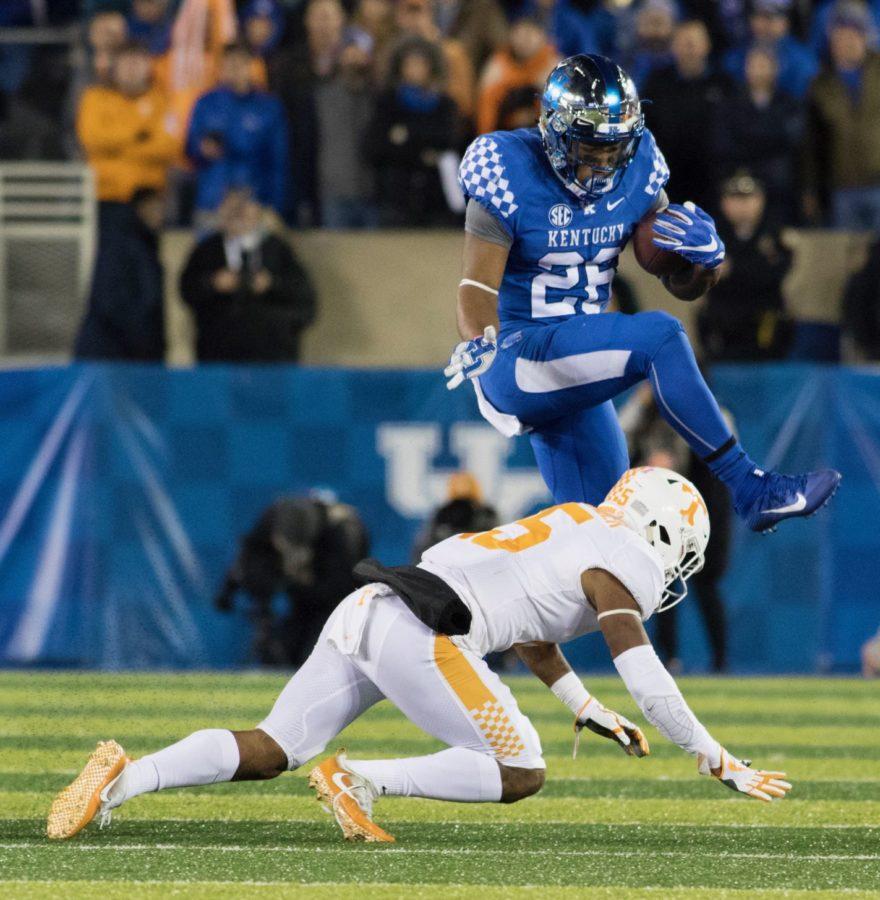 The game opened with Benny Snell fumbling the ball on the first play, recovered by the Volunteers at the UK 15. The Volunteers pushed deep into UK territory, but couldn’t find the end zone as they were forced to kick a field goal to put them up 3-0.

Snell would make up for that mistake, however, scoring three touchdowns in the first half for the first time in his career. He’d finish the game with no more touchdowns, but 180 yards.

After his touchdown, however, tempers flared when UK special teams walk-on Charles Moushey got tied up with UT return blockers and scuffle ensued that included several members from both teams. The entire rosters on both sides were assessed unsportsmanlike conduct penalties, meaning anyone else that committed a similar foul would be ejected. Four players ended up being disqualified.

Despite Snell’s offensive prowess, the Volunteers couldn’t be stopped on the ground, either. Backup running back Ty Chandler ran all over the Cats after John Kelly’s drug-related suspension. In the first half alone, he ran for 87 yards and two touchdowns, only being brought down behind the line of scrimmage once.

At the half, the Cats clung to a 21-20 lead. Then disaster struck as star quarterback Stephen Johnson was tackled hard on a 34-yard run and had to be immediately walked to the locker room in the third quarter. Junior backup Drew Barker entered the game and immediately fumbled the ball for UK’s third turnover on his first play.

Luckily for the Cats, Johnson re-entered the game later in the quarter to break out a 17-yard run during his first play back, but not before the Volunteers scored a field goal to go up 23-21. Garrett “Juice” Johnson would fumble on the same drive as his quarterback’s return for UK’s fourth of the game.

Luckily for the Cats, they were able to hold Tennessee to a field goal, and a 26-21 fourth quarter lead.

Both offenses stalled for most of the fourth quarter, until Tennessee threatened UK territory midway through the fourth. The Volunteers missed a critical field goal attempt that would have put them up eight with 8:22 left.

The Cats failed on their first drive attempt, but with less than a minute to go, Stephen Johnson led UK down the field and dove over a defender on an 11-yard run for a touchdown, putting the Cats up one. Snell later caught the ball from Johnson for the two-point conversion.

With the go-ahead score, Johnson now moves into second on UK’s all-time list for game-winning drives.

The Volunteers would attempt a hail mary pass from their own 49-yard line, which completed, but the play was stopped at the 2-yard line as time expired.

The Cats are now bowl eligible with a 6-2 record, and have defeated the Volunteers for the second time since 1985.