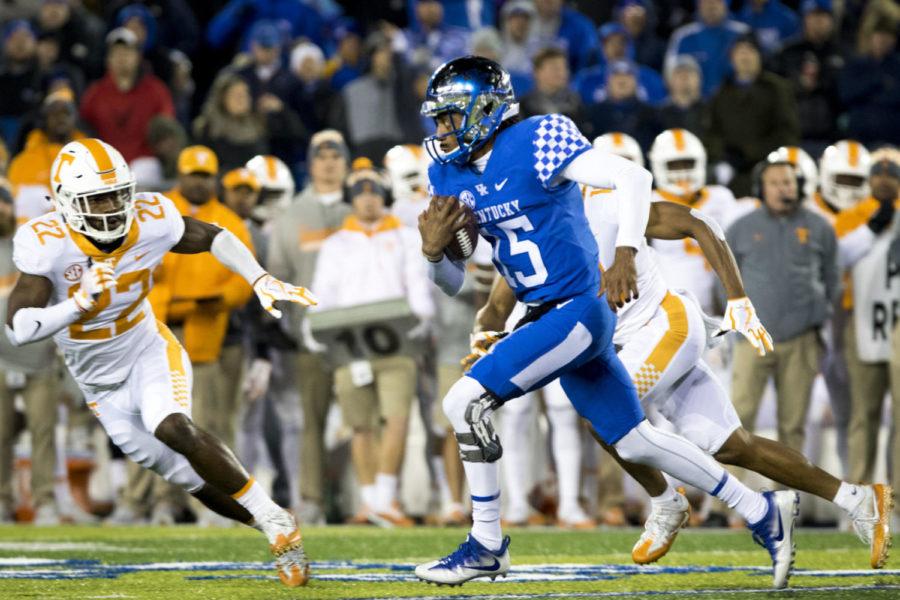 Kentucky Wildcats quarterback Stephen Johnson runs the ball down the field during the game against Tennessee at Kroger Field on Saturday, October 28, 2017 in Lexington, Ky. Kentucky won 29 to 26. Photo by Arden Barnes | Staff

After suffering a left shoulder injury in the win against Tennessee, Stephen Johnson still has yet to log any practice time leading up to the game against Ole Miss.

Johnson said his shoulder was sore the day after the game, but has been slowly feeling better as the week goes on.

“Still trying to rehab a little more just to get completely back 100 percent,” Johnson said after Tuesday’s practice.

Johnson would eventually return to the game against Tennessee after suffering the shoulder injury, where he led the Cats on a game-winning touchdown drive. When Johnson dove into the end zone for the touchdown, he landed on the injured shoulder, but he said it didn’t hurt in that moment.

“My adrenaline was just rushing at that point, so it felt pretty good, but after the game it was shooting pain,” Johnson said.

The injury also didn’t stop Johnson from making the right call on read option plays, as Gran said Johnson was 100 percent correct on every single on of his reads against Tennessee.

Johnson attributes that success to working with running back Benny Snell during practices.

“Working it in practice all the time, just trying to get that relationship with Benny and really kind of trust each other on where we’re going to go and who’s getting the ball and how that’s all going down,” Johnson said.

Offense working to put fumbles behind them

UK’s offense might’ve come up with the game-winning drive to defeat Tennessee, but it was their four fumbles that put them in that situation to begin with.

The fumbling issues caused some disappointment in Gran, who worked hard to eliminate fumbles after the problems players had holding onto the ball last year.

“We start everyday with ball security, we’ve done since everyday since the spring since we were horse crud last year,” Gran said. “Up until this point we’ve been pretty good, we’ve been one of the tops, it was inexcusable.”

The fumbles against Tennessee gave the Volunteers momentum many times throughout the game, but Snell, who gave up the first fumble, didn’t let that affect him.

“A lot of the prior situations like that will get to me, but I knew how big of a game that was, so I didn’t let it get to me,” Snell said.

Drake Jackson said he shared a similar feeling, as he remained confident when he took the field for the eventual game winning drive.

“First drive, we all just came out differently, even every time after we fumbled we came back to the bench and said, ‘they didn’t stop us,’” Jackson said. “That’s why on that last drive with four minutes and 40 seconds left, we were like, ‘okay guys, let’s hang onto the ball, we’ll go down there and punch it in.’”

“I think the two catches he made were as big as they get,” Gran said. “Those are the competitive catches that we needed to make.”

Richardson has made some big catches throughout the season, including the toe-drag catch late in the fourth quarter to keep UK’s game winning drive alive.

However, Richardson knows in order to be a good receiver, he needs to do more than catch passes.

“I try to work on my blocking down the field, try to help everybody else make a play except for me,” Richardson said. “Football is a team game, and for receivers, we had to do more than run routes and catch the ball, we got to block too.”