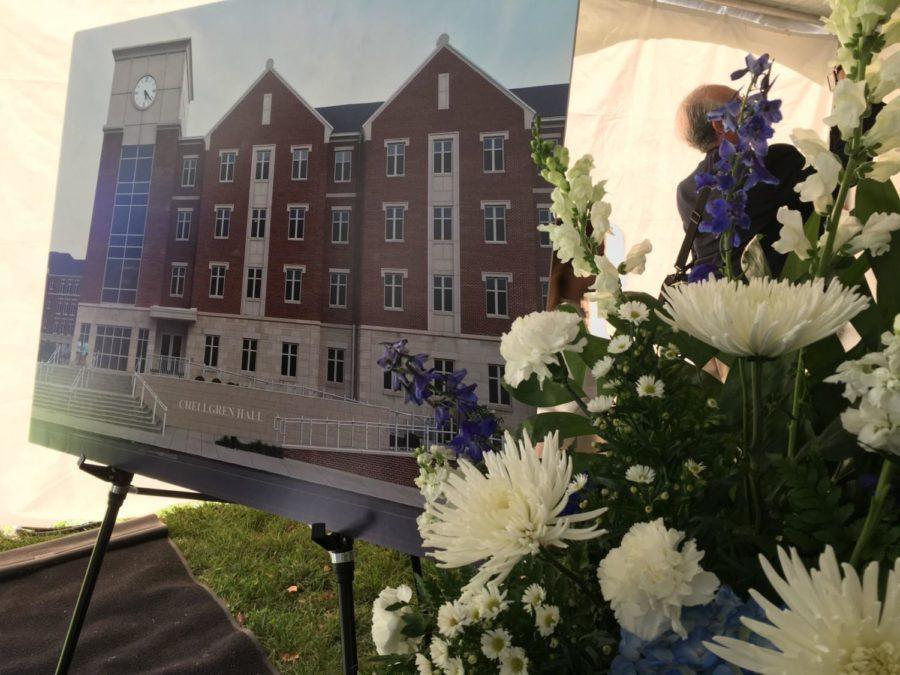 UK President Eli Capilouto announced that alumni and philanthropist Paul Chellgren and his wife, Deborah Cole Chellgren, are donating $12 million to the university. Woodland Glen I will be renamed Chellgren Hall in their honor. Photo by Bailey Vandiver.

The University of Kentucky Board of Trustees will accept a donation of more than $12 million.

Alumni and philanthropist Paul Chellgren and his wife, Deborah Cole Chellgren, are donating the money to support the Chellgren Center for Undergraduate Excellence. The couple began funding the center in 2005.

Including this gift, the Chellgrens have now donated more than $18 million to UK.

UK President Eli Capilouto announced the major donation at a ceremony in the Woodland Glen courtyard on Wednesday.

“Thank you for the tremendous impact you have had and will continue to have on our students, our university and our beloved Kentucky,” Capilouto said to the Chellgrens.

Because of this gift, Woodland Glen I will be renamed Chellgren Hall.

Chellgren remembered his own time as an undergraduate at UK, beginning 57 years ago. For three years, he lived in the Sigma Chi house, then located just feet away from the building that now bears his name.

Chellgren, who served as chairman and CEO of Ashland, Inc., said that as his career progressed, his ability to be philanthropic increased. He said UK was “at the top of the list” of institutions he wanted to support.

The tent in the Woodland Glen courtyard was overflowing with people, from family members of Chellgren to “Chellows,” the nickname for the students who participate in the Chellgren Student Fellows program, also funded by his past donations.

Chellgren said that more than 400 Chellows have participated in the program since its founding in 2007.

More than $3.5 of the $12 million will support the Chellgren Center, including launching the Chellgren Initiative to advance undergraduate excellence.

The remaining $8.5 million will create an endowment to support ongoing needs of the center.

Capilouto jokingly encouraged others in the crowd to follow the Chellgrens’ lead in donating to the university.

“We have four unnamed buildings in this quad,” he said.

Philipp Kraemer, director of the Chellgren Center, emceed the event.

“It’s good to be at the University of Kentucky,” he said as he concluded the program.