Editorial: No matter what you say, free speech belongs to everyone 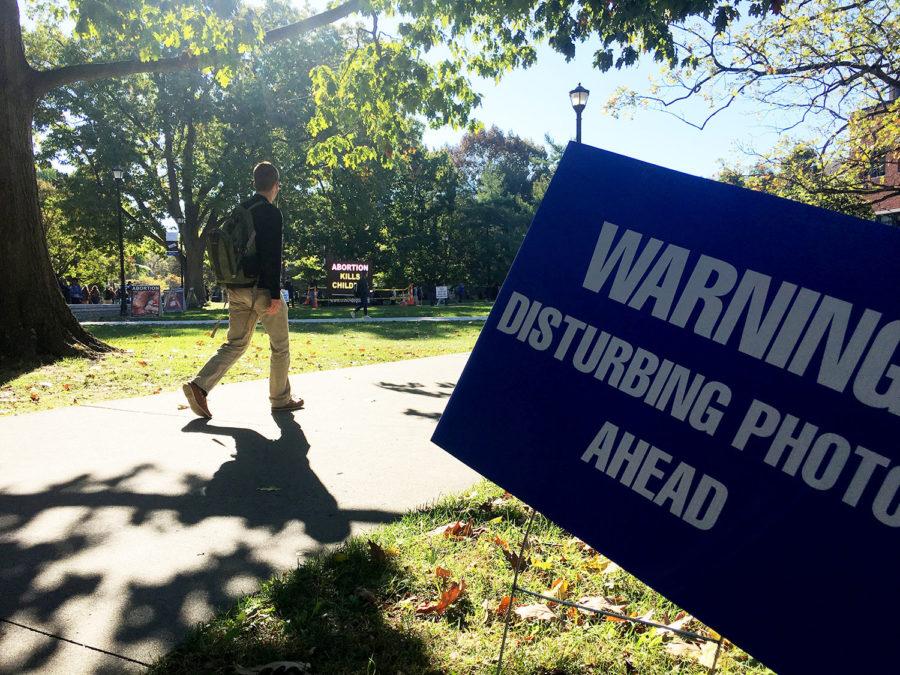 Created Equal, a national anti-abortion group visits Lexington, Kentucky outside Whitehall classroom building on the University of Kentucky campus as a stop during their month-long tour on Thursday, October 19, 2017. Photo by Arden Barnes | Staff

Everyone is OK with free speech– at least they are until someone who disagrees with them uses their own free speech.

This all begs the question: how far is free speech allowed to go?

In the United States, the First Amendment to the Constitution grants citizens freedoms of expression. “Congress shall make no law… abridging the freedom of speech.” This means that all speech—words promoting equality, disturbing hate speech, announcing one’s religious beliefs, a thought that you disagree with—is all protected by the United States.

Free speech was created to ensure that everyone could have a voice. In order for a democracy to work, both the majority and the minority must be allowed to speak their views, even though they are on opposing sides.

“We all should be willing to listen to others’ points of views and to examine our own through the prism of those discussions,” he said. “That should certainly be part of a liberal education.”

The problem, he said, is that everyone wants to speak their mind without fear of government intervention, but everyone is far less enthusiastic about letting people with whom we disagree enjoy the same degree of freedom.

Freedom of speech also means one party cannot stifle another party’s opinion. If someone disagrees with you, they cannot destroy your property or bring any harm to you, and that goes the other direction, too. While Created Equal posted disturbing, graphic images, the protesters who tore down Created Equal’s signs were wrong.

“There is never, under any circumstances, a First Amendment right to physically interfere with another person’s legally protected speech,” said Frank LoMonte, director of the Brechner Center for Freedom of Information at the University of Florida. “Even if the speech is highly offensive or hateful, the law never recognizes a ‘right’ to lay hands on someone else’s body or property. If you believe that a speaker has overstepped the legitimate uses of public property, your remedy is to call the police and ask for the speaker to be cited, not to take matters into your own hands.”

During Thursday’s protest, UK Police officers could have handcuffed and yelled at the protester who knocked over signs, but they did not. They talked with her and quickly resolved the situation.

“As normal, the UK Police Department will review the event and the procedures undertaken to maintain a peaceful expression of First Amendment rights by opposing groups,” UK Police Chief Joe Monroe said. “Today, no arrests were required because, generally, people made their voices heard in a respectful and civil way.  The event took place with minimal disruptions.”

LoMonte said that colleges cannot make their own policies to override the First Amendment. If UK were to make a “no hate speech” policy, it could be subject to a constitutional challenge as hate speech is protected. As long as everyone is safe, any speech can continue.

“Colleges have some safety obligation to make sure that protests don’t devolve into shoving matches or worse, so campus security has a legitimate role to play in keeping counter-speech from crossing the line into counter-violence,” LoMonte said. “Counter-speakers of course must have a reasonable opportunity to be heard alongside the speakers they’re protesting. But freedom of speech does not give anyone a license to break the law, and speakers can be ticketed or go to jail if they obstruct traffic or destroy property or trespass where they’re not allowed to be.”

Those identifying as liberals, conservatives or somewhere else in between are allowed to have their opinion and express it with their voice.