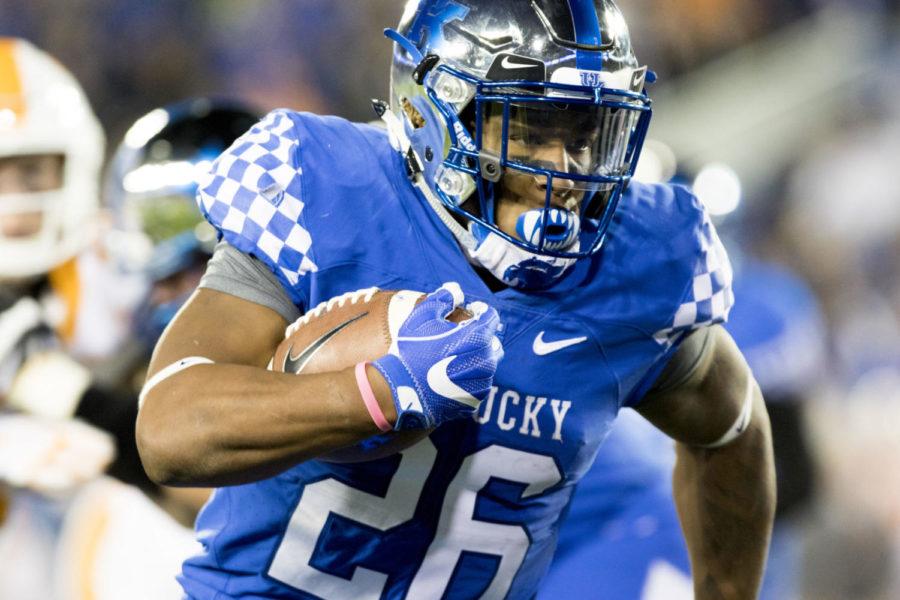 Kentucky Wildcats running back Benny Snell Jr. runs to the in zone scoring a touchdown during the game against Tennessee at Kroger Field on Saturday, October 28, 2017 in Lexington, Ky. Kentucky won 29 to 26. Photo by Arden Barnes | Staff

UK football pulled out a victory over the Tennessee Volunteers on Saturday, with a final score of 29-26. The Cats are now 3-2 in conference play and have qualified for a bowl game for the second year in a row.

After Saturday’s game against the Volunteers, Snell is now ninth all-time in school history in rushing in only his second season. He has also marked his fourth 100-yard game of the season and eighth of his career, and has rushed for 100 yards in six of the last seven home games. Snell also rushed for three touchdowns on the night for the first time all season, after running for at least three one time last season against New Mexico State.

After fumbling the ball to start out the game, many were questioning if they would be able to depend on Snell as they had all season. With 191 yards gained and only 11 lost, he proved that he would not let a single moment impact his performance in the entire game and flush it to put his team in a position to win.

“I made that error and told myself that I was not going to let it happen again and go out there and do what I can for my team,” Snell said. The Cats certainly did not play their best game but they pushed through their many turnovers and missed opportunities and made up for it in the end.

Stephen Johnson was taken out of the game due to a shoulder injury but returned shortly after exiting the field, with a great response from the fans. When the Cats lost their lead in the third quarter, the team seemed a bit defeated but Johnson’s return to the game fueled the team to overcome a 23-21 deficit to beat Tennessee for the first time in six years. Snell pushed the drive with several rushes, as well as catching the pass from Johnson for the team’s first two-point conversion all season.

The Cats return to Kroger Field next Saturday where they will face the Ole Miss Rebels, and kick off is scheduled for 4 p.m.