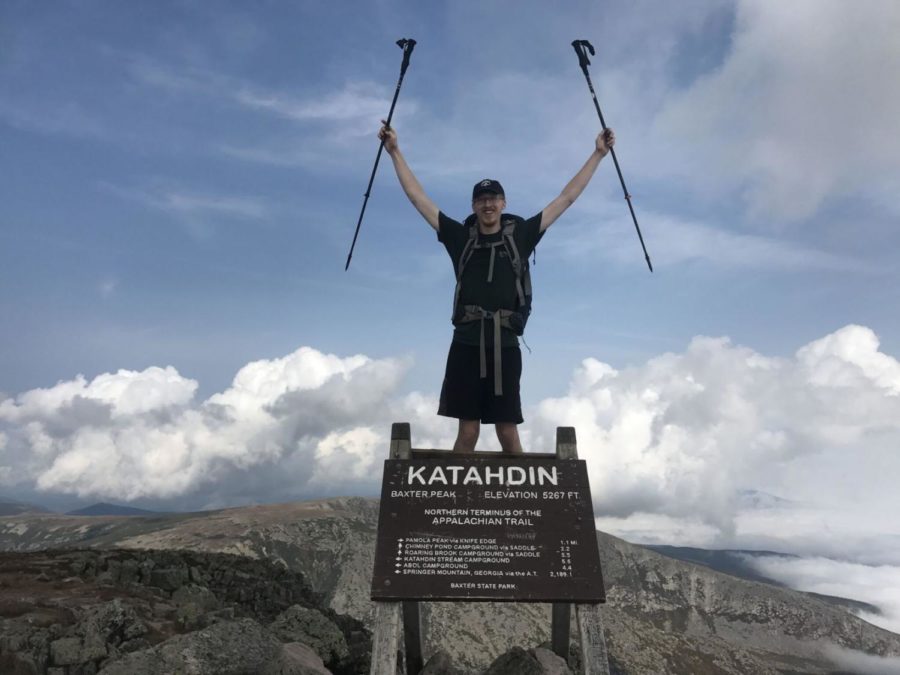 McAfee Knob in Virginia, Mount Katahdin, Maine and the Grayson Highlands of Virginia are three of the multiple landmarks former Kernel editor-in-chief Will Wright encountered when he hiked the Appalachian Trail. On Feb. 20, 2020, Wright was named a New York Times fellow.

My feet stared back at me and begged for mercy.

Days of hiking in wet shoes and socks had worn the skin of my toes to a red, painful sheen.

I cursed as I forced my shoes back on and rose to my feet.

About four miles of trail separated me from camp, and every step hurt more than the last.

I hoped to set up my tent before dark, but the sun had other ideas. It slid behind the hills without a goodbye, and darkness crept between the trees.

As the last bit of light floated away, I heard a rustling behind me. I turned.

About 20 yards away a black figure floated through the brush and disappeared behind a tree.

The bear remained hidden for a few seconds, then poked its head out from behind the tree like an impatient child playing hide-and-seek. As soon as it saw me, it turned and booked it into the woods.

I followed the bear, hoping for a better look, but then thought better of it and returned to my hike.

This was my first bear encounter on the Appalachian Trail.

About 6,000 people attempt to hike the entire Appalachian Trail every year.

According to the Appalachian Trail Conservancy, about 20 percent succeed.

The trail is 2,190 miles long and runs through 14 states on its way from Georgia to Maine. Thru-hikers typically take five to seven months to complete the trail. I took about six.

After graduating from UK in December 2016, an Appalachian Trail thru-hike just seemed like the right thing to do.

I spent many weekends in college exploring the Red River Gorge in Kentucky’s Daniel Boone National Forest. The Gorge rekindled my love for the outdoors, and as graduation approached, I knew I wanted to spend some time in the woods before jumping into the workforce.

To prepare for the trail I read one book, went on a handful of overnight backpacking trips and watched about 10,000 YouTube videos.

I bought a backpack, tent, sleeping bag, water filter and a handful of other do-dads which I hoped would save me if things took a turn for the worse.

Before long, it was March 15, and I was in Georgia with a backpack on my shoulders and a strange feeling in the pit of my stomach.

A soft layer of snow blanketed the forest floor, and the question, “What was I thinking?” played on loop in my head like an annoying kid who asks, “Are we there yet?” on a long road trip.

But I survived the first day, then the second and the third.

By the end of the fourth day, I thought I was Daniel Boone reincarnate. Boy, was I wrong.

Injury came down on me like the gavel of a judge in the Salem Witch Trials.

By day seven, my Achilles tendon, which connects the heel to the calf muscle, had swollen almost to the size of a golf ball. It felt like a hot iron shot up my heel with every step.

“There’s no way I’m quitting this early,” I thought.

With a new pair of shoes and some encouragement from other hikers, I continued.

The tendon healed after several weeks. Though other injuries never ceased to assault me, I knew they would pass.

On and on I went. I eventually crossed the Mason-Dixon line, passed close enough to New York City to see the skyline on a clear day, and finally found myself in the wild mountains of southern Maine.

I slept in my tent almost every night, and hiked between 15 to 18 miles a day in good terrain. I went to bed when the sun went down, and woke up when it rose, give or take the occasional night hike.

Contrary to some people’s ideas about the trail, I did not live off squirrel meat and wild mushrooms. My diet consisted mostly of candy bars, ramen noodles, tuna, Spam, rice and Pop-Tarts bought in grocery stores. I got to those stores by hitchhiking and hoping for the best.

With the physical injuries came other pains. Fits of loneliness, boredom and fear were not uncommon, but like the tendon, I knew the swells of emotion would eventually cool and return to their proper size.

I made friends with other hikers of all ages and backgrounds. Most were young people, but I also met an 82-year-old man called Greybeard who was attempting to become the oldest person to thru-hike.

The other hikers and I swapped stories about animal encounters, traded recipes for on-trail dinners and shared equipment with each other if one of us was in need.

Residents of nearby towns fed me, gave me shelter and drove me to grocery stores, and would not accept a penny.

Generosity was about as common as the trail was long.

More than once I found myself out of food and about a day’s hike from the nearest town. I knew I would survive, but I also knew carrying a 35-pound pack through the mountains with nothing to eat is a lot like writing a last-minute midterm paper without coffee — it can be done, but it will not be fun.

Just as the misery settled on me like dew on a cow pasture, a pickup truck full of locals would pull up to a trailhead with sandwiches and hot coffee. They would not let me leave until I ate my fill.

Hiking the Appalachian Trail was the perfect post-college adventure. It applied the finishing touches to lessons learned and skills developed during my time at UK.

Like college, the trail fosters independence and self-reliance. It forces hikers to make new friends and find new experiences. It requires hard work and dedication to reach the finish line.

Unlike college, it requires quite a bit of hitchhiking, regular hiking and the occasional scare-the-bear-away scream.

The trail provides a buffer zone between college graduation and that first “real” job. It allows time to think about career decisions, relationships and long-term goals in life before diving into adulthood.

It also allows time to jump off bridges into deep pools of clear water, and opportunities to participate in full-fledged conversations with squirrels who have no interest in anything you have to say.

Adventure is worth finding. Your toes may ache and your stomach may growl in anger, but you will never play hide-and-seek with a bear until you go looking for one.