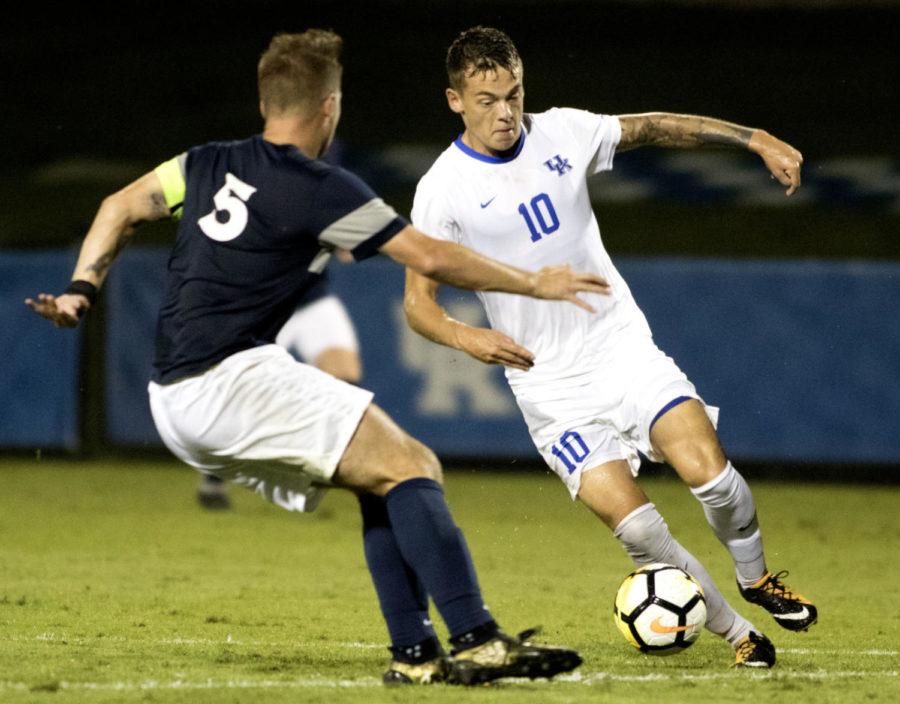 Junior Mikkel Pederson dribbles past a defender during the game against Xavier on Wednesday, September 20, 2017 in Lexington, Ky. Kentucky tied Xavier 1-1. Photo by Carter Gossett | Staff

The Wildcats hit the road for Norfolk, Virginia on Saturday in search of their second consecutive win. However, No. 13 Kentucky lost to the Old Dominion University Monarchs 2-0. This marks Kentucky’s first conference loss this season.

Both teams came into the match as the top two C-USA teams so far in the season. Winning in Norfolk has proven to be a challenge for ODU’s opponents this year as the Monarchs are 4-1 there. However, the Monarchs had to deal with facing Enrique Facusse, who is ranked 15th in the country with a goals-against average of 0.51.

Old Dominion wasted no time establishing their presence by scoring in the opening minute. Kentucky attempted to respond as Mikkel Pedersen fired a shot on goal in the 16th minute and missed. He had a curling shot later 19 minutes later which led to the first corner kick of the match.

Once the second half opened, the Cats immediately had a quick corner kick but failed to capitalize on it. In the 50th minute, the Monarchs put the finishing touches on their victory with another goal to make it 2-0.

The 6-2-2 Wildcats will return home to The Bell on Sunday, Oct. 8 at 2 p.m. to face the South Carolina Gamecocks.