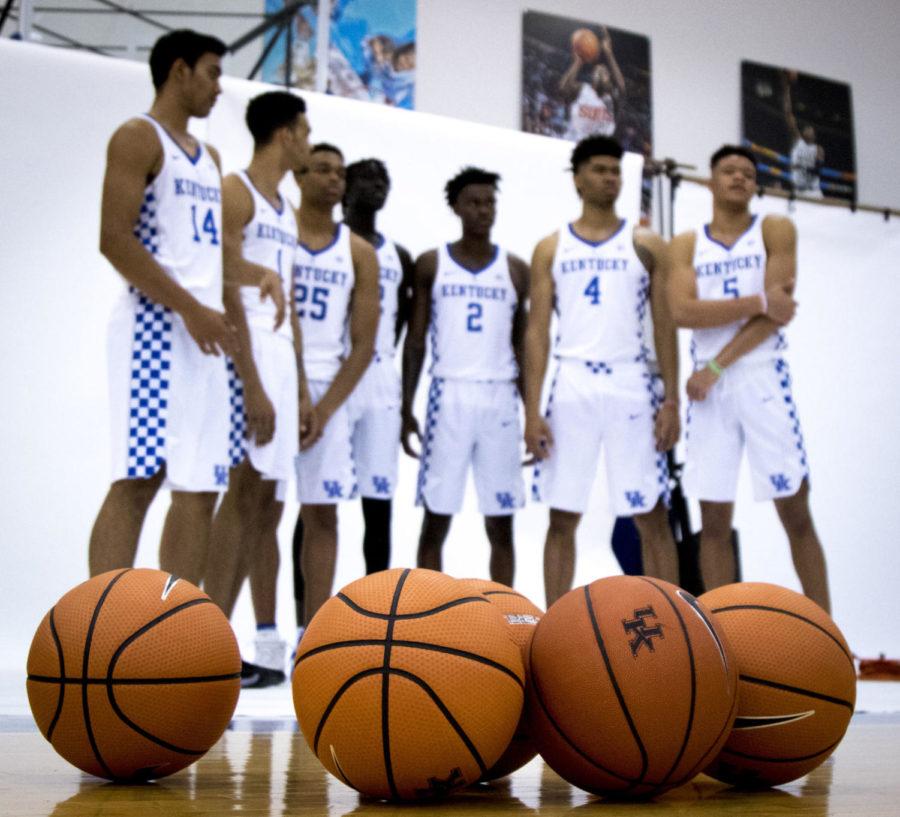 Members of the UK Men's Basketball team pose for a portrait during the University of Kentucky Men's Basketball photo day on Monday, September 18, 2017 in Lexington, Kentucky. Photo by Arden Barnes | Staff

After five of last year’s Cats signed NBA contracts, head coach John Calipari has reloaded his squad with more young talent. Have a look at the 2017-18 UK men’s basketball team:

FYI: Washington was ranked 11th in the ESPN Top 100. This makes him the second highest-rated player in this class of newcomers. Washington is long and athletic, great at attacking the rim and also has an impressive mid-range game.

FYI: With a wingspan of 85 inches, it’s needless to say that Vanderbilt is a powerhouse. He’s very versatile, aiding in passing, assisting and finishing while on the court. His length and athleticism also allows him to rack up plenty of rebounds.

FYI: Green is a playmaker. He is considered one of the best guards in the country, despite his height. Getting things done on both ends of the court, he racks up assists and is a key player on defense. He isn’t ‘athletic’ or ‘speedy’ but he is a leader on the court, which is what a point guard should be.

FYI: Diallo was a midyear enrollee, joining the team in January 2017. He is primarily a player who plays above the rim, using his length and strength to be an attacking powerhouse. He is a perimeter player but also utilizes his length by collects boards.

FYI: Despite Gilgeous-Alexander not being a top-ranked player in his class, he has a lot of talent. He is a speedy and versatile guard that can play more than one position, making plays offensively and defensively.

FYI: Baker is a great scorer with an impressive jump shot, hitting 94 three-pointers his senior year. Shooting is not the only thing he is capable of though, he is a playmaker and a pretty good defender.

FYI: In high school, Knox was ranked 10th in the ESPN Top-100, making him the highest-ranked player in this class of newcomers. He’s an amazing athlete for his size with impressive speed. He attacks the rim with grace and is quick on his feet.

FYI: With an impressive wingspan of seven-foot-three, he is marked as a long, athletic and strong center. He was considered one of the best rebounders and post defenders in high school basketball. He utilizes his size by being a tool on the defensive end, playing tough and also finishing plays around the rim.

Here are the returners for the Wildcats:

FYI: Gabriel is one of the key returning players for the Wildcats. His ability to switch off screens and guard multiple positions makes him a stand out player. He is extremely versatile and hopefully this season will be his breakout season.

FYI: Wynyard proved himself last season when he subbed in for Bam Adebayo and shocked fans and coaches with his impressive game. His size and strength allows for him to be a powerhouse defensively.

FYI: Killeya-Jones was the first player to commit to the 2016 recruiting class. He appeared in 15 games his freshman year. He has the length and offensive skills to be a key player for the Wildcats this season.

FYI: Calipari played in 15 of 36 games last season, proving that he is a good shooter. He nailed two threes while getting his shine on the court. Wanting to prove he is a key player, Brad will definitely be showcasing his skills this season.

FYI: Pulliam is another walk-on for the Wildcats. His strong suit is scoring. In high school, he racked up a total of 1,000 points. Growing up, Pulliam watched UK basketball as a kid. He chose UK over scholarships to many other schools.