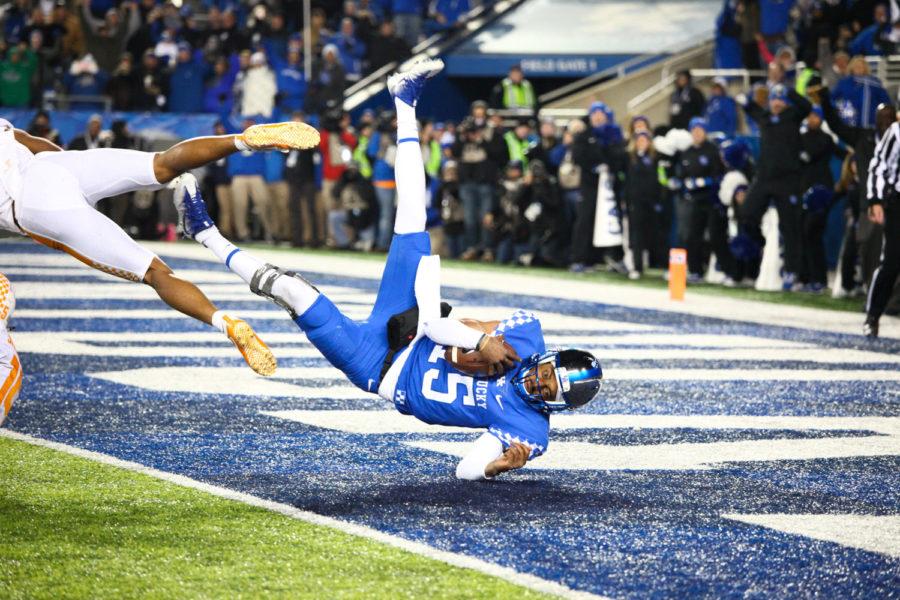 Stephen Johnson might not have lit up the box score like a game-winning quarterback should, but it was the plays not reflected in the box score that is slowly making Johnson one of the best quarterbacks in UK football history.

Johnson only threw for 46 yards and ran for 84 more. His 46 passing yards are the lowest he’s thrown for all season, but Johnson made up for it with many big plays that led the Cats to their win over Tennessee.

“Just a great job in all his reads today, they were crashing and I think he was 100 percent in every single one of his reads,” offensive coordinator Eddie Gran said after the game of Johnson. “Just a fantastic job, especially getting banged up a bit.”

Johnson initially excited the game midway through the third quarter after he got loose for a 34-yard gain. Johnson landed hard on his left shoulder and said he initially couldn’t move it.

Johnson would immediately head into the locker rooms, where his x-rays were ruled negative. He came sprinting back on the field, which caused the Kroger Field crowd to let off one of its loudest roars of the night.

“That just gave me a little life too, it really warms your heart when you come on the field and all of BBN screaming and shouting and just really excited for you,” Johnson said.

Johnson would come back in near the end of the third quarter, and in his first play back, he rushed for 17-yards and again was hit on his left shoulder. However this time, he bounced right back up and got back in the huddle for the next play.

“One of the toughest kids I’ve ever been able to coach in my life,” Gran said.

“There’s not many players that probably would have came back and even played in that situation,” head coach Mark Stoops said. “He’s absolutely tough as nails and we have so much respect and pride for him.”

Stoops is right, it took Johnson lots of courage to come back on the field and lead his fifth game-winning touchdown drive, which is the second most in school history. Johnson has proved his toughness before, but no other game tops this one in terms of Johnson’s toughness.

In his short career at UK, Johnson has one 13 of his 19 games played, included defeating rivals Louisville, and now Tennessee. Defeating the Volunteers qualifies the Cats for a bowl game, where Johnson will have another chance to add to his growing UK legacy.

Johnson will likely celebrate this game for a while, and rest his shoulder. However, come practice time next week, Johnson will be back in preparation mode to prove to fans that he’s one of the best quarterbacks in UK history.

“It really means a lot just to get us to six wins, just keep moving down the line in our conference in our schedule,” “We just got to keep going up from here.”