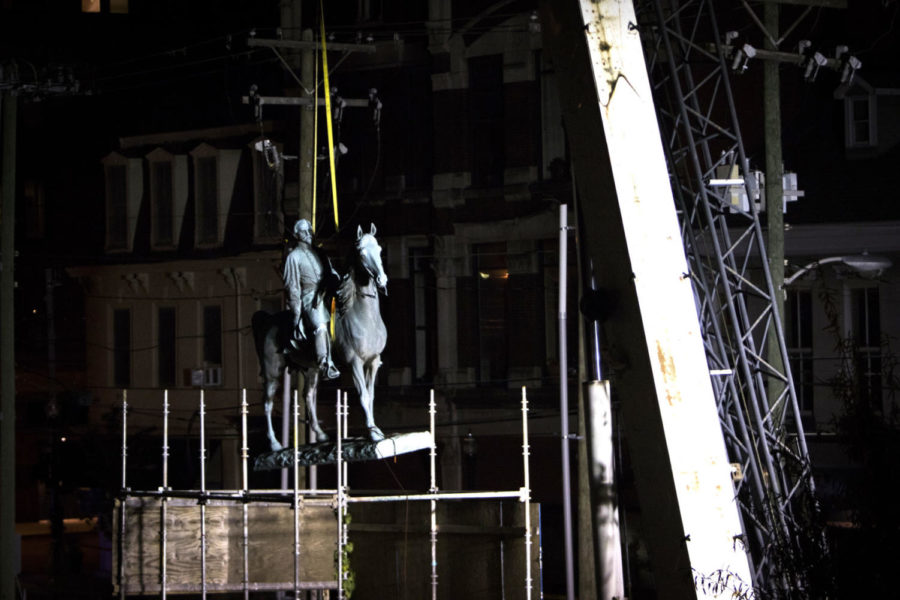 The statue of John Hunt Morgan was moved to storage from its original location in downtown Lexington, Kentucky on Tuesday, October 17, 2017 after Lexington's long debate about their removal. The city plans to put the statues in Lexington Cemetery permanently. Photo by Arden Barnes | Staff

Just before midnight on Tuesday, the John Hunt Morgan statue was lifted by crane from its pedestal in front of the old Fayette County Courthouse.

The lift was the climax of six hours of constant construction work that saw the removal of Lexington’s long-debated Confederate statues. About three hours earlier, the John C. Breckinridge statue was hauled away on a large flat bed semi truck.

But the work is not finished. The city hopes that the statues will soon be moved to their permanent home in the Lexington Cemetery, according to Bishop. Bishop said the city did not know exactly when the relocation would take place.

The city made the decision to remove the statues on Tuesday morning after the mayor received Attorney General Andy Beshear’s decision that the statues could be moved, Bishop said.

Originally, the Kentucky Military Heritage Commission had the final say on the statue relocation, but Beshear’s opinion ruled that the commission did not have jurisdiction over the statues.

Bishop said the city decided to move the statues quickly for “a lot of the obvious reasons.”

The crowd that gathered to watch the statue removal would cheer when a large section of a statue was lifted by the crane. Passing drivers sometimes honked their horns in support of the construction workers.

“The dissenting voices have been incredibly polite,” Bishop said of the crowd. “They’ve voiced their opposition but in a very noble way. But the overall consensus here, folks seem to be pretty  pleased with what’s happening.”

Bishop said the statue relocation is good for the city and good for UK.

“Hopefully this will be a good reflection on the university,” Bishop said. “We feel like the response that we’ve seen from the student community has been positive towards this.”

Take Back Cheapside is a Lexington activist group that sought the removal of the Confederate statues.

DeBraun Thomas, one of the founders of Take Back Cheapside and a former UK student, said that the removal of the statues should encourage students to get educated and get involved in the community.

“From a student stand point, it’s an important thing to see something like this happen,” Thomas said. “Because all it takes is just one person to rise up and say, ‘This isn’t right.’ And work to fight against the oppression.”

Russell Allen, another founder of the group, said that the statue relocation could give hope to Lexington’s minority communities.

“I think it’s something that can give people hope,” Allen said. “If we work hard enough together as a community, we can take those under-served communities and lift them up through our work and activism.”

Curious spectators were seen around the courthouse well past midnight. Many of them were willing to give their opinion.

“I think it’s definitely a step in the right direction,” James Bacon-Brown, a UK graduate who supported Take Back Cheapside, said. “It’s something that should’ve happened a long time ago and I we keep seeing this in other places all over the country.”

Brian Lathrem, a life-long Lexingtonian said the public should be consider both sides of the issue.

“Realistically it could go either way,” Lathrem said. “You’re destroying what could be heritage for some whether it’s a negative or a positive thing it’s still heritage. For others, it’s obviously a negative thing. You just have to look at it both ways.”