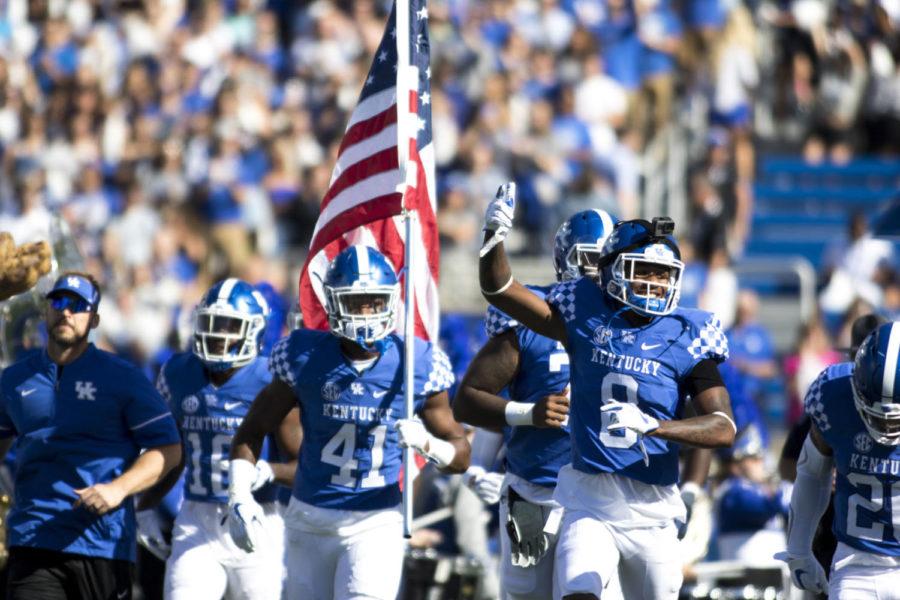 The University of Kentucky Wildcats take the field prior to the game against Eastern Michigan on Saturday, September 30, 2017 in Lexington, Kentucky. The Cats won 24 to 20. Photo by Arden Barnes | Staff

The first of those six games will be against the Missouri Tigers at Kroger Field this Saturday, Oct. 7. The game will take place at 7:30 p.m. on the SEC Network.

When asked about the Wildcats’ upcoming opponent, Kentucky head coach Mark Stoops said that his main concern was Missouri’s offense.

“The number one thing you always are concerned about when you play them is their offense and the tempo at which they play,” Stoops said. “I also, you know, their quarterback (Drew) Lock is as good as there is.”

Missouri is 1-3 on the season and is coming off a bye week. Stoops said the week off will leave the Tigers wanting to start the second half of their season differently.

“I anticipate them coming out and playing extremely fast and backs against the wall and I know they’ll play well,” Stoops said.

Kentucky linebacker Jordan Jones suffered a shoulder injury during the second game of the season against Eastern Kentucky. Jones has been left off the depth chart since the end of that game and is not listed this week against Missouri as well.

Junior Eli Brown has filled in for Jones since the injury and Stoops said Brown has done a good job so far but is a little banged up.

“He needs to eat right and lift in the offseason, get more physical, because he shows flashes,” Stoops said. “He’s very athletic, but now that he’s playing quite a few snaps, he’s getting banged up quite a bit as well.”

When addressing Benny Snell’s performance against Eastern Michigan, Stoops said there was some frustration coming off the loss the previous week.

“There was some frustration that set in, I’m not saying just with Benny but just with the team that we have to address and work around,” Stoops said.

With Missouri coming off their bye week and Kentucky not having their bye until the week after the game against the Tigers, Stoops said that cannot be a factor this week.