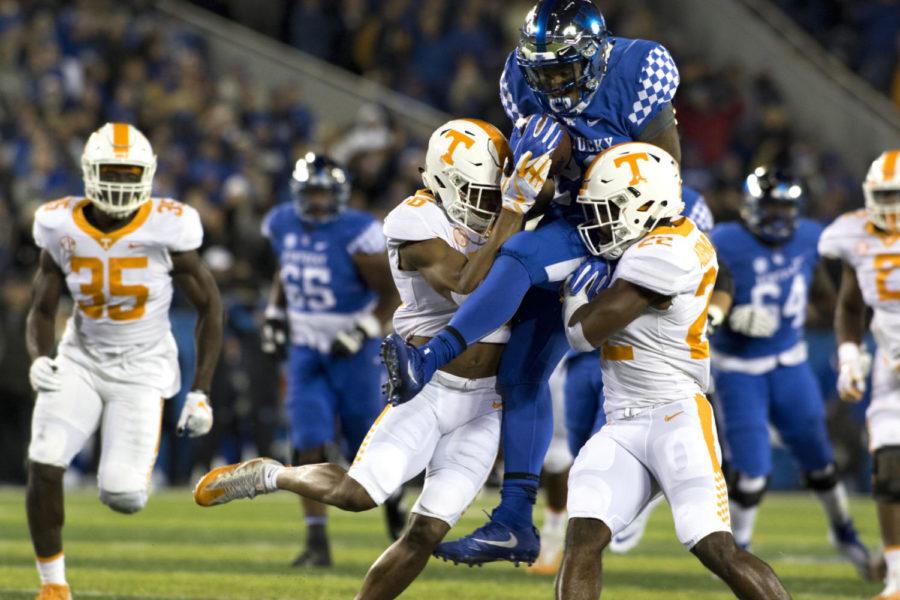 Kentucky Wildcats running back Benny Snell Jr. gets smushed by two defenders during the game against the Tennessee Volunteers at Kroger Field in Lexington, Ky. on Saturday, October 28, 2017. Photo by Josh Mott | Staff.

The UK football team (6-2, 3-2) will look to carry the momentum from their 29-26 victory over border rival Tennessee into their game this week against Ole Miss. The Rebels (3-5, 1-4) are looking to bounce back into the win column after last week’s 38-37 loss to Arkansas.

A victory for the Cats would put them at seven wins on the season, a mark they have only reached eight times over the last 39 years. The two teams haven’t played since 2011, when the Wildcats won 30-13 in Lexington.

Ole Miss has been reliant on their potent offense so far this season, averaging 31.5 points per game and scoring 37 points or more four times. The points have been coming from their SEC-best passing offense, averaging 338.1 yards per game through the air.

Their quarterback to start the season, Shea Patterson, went down against LSU with a season-ending knee injury. His replacement, Jordan Ta’amu, is a junior college transfer who is a dual threat quarterback.

Since taking over, Ta’amu has thrown for 446 yards and rushed for an additional 96. The Rebel’s number one wideout option is sophomore A.J. Brown. In the season opener against South Alabama, Brown broke the school record for receiving yards in a game with a 223-yard day.

Brown followed that performance up with a two-touchdown, 156-yard game the next week. Brown currently leads the SEC in receiving yards.

The Wildcats continue to be carried by senior quarterback Stephen Johnson. Kentucky is now 13-6 over their last 19 games, and Johnson has seen time in all 19 of those games.

He is 11-6 as a starter during that time with two wins in the relief role. Johnson proved again against Tennessee that he has the clutch factor. Johnson went to the locker room with an injury in the third quarter and came back out to lead his team on a last-minute, game-winning touchdown drive.

It was the fifth game-winning of his career, the second most of any UK quarterback since 1955.

Kentucky’s ground game was back in full effect against Tennessee with Benny Snell Jr. having 180 yards against the Vols. It was the most rushing yards ever for a Kentucky player against Tennessee.

Snell has 193 carries for 989 yards over his last eight SEC games with 12 touchdowns. Snell currently ranks fourth in the SEC in rushing yards with 90.2 yards per game.

If Snell can manage 188 yards this week, it will put him at 2,000 for his career, a feat only eight other players have done in UK history, as only a sophomore.

According to ESPN’s Football Power Index, UK has a 61.1 percent chance to beat Ole Miss. The game kicks off at 4 p.m. on Saturday at Kroger Field. The game will be broadcast on the SEC Network.