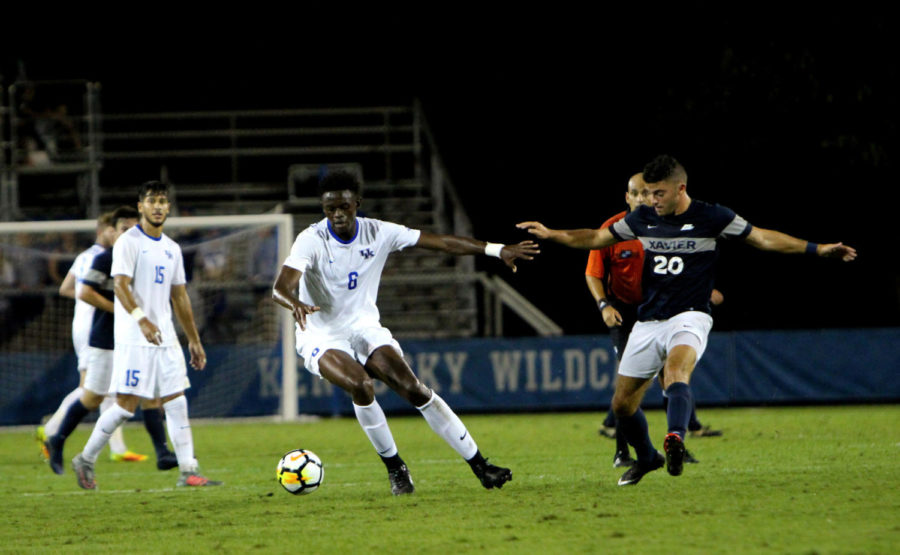 Sophomore defender Amie Mabika drives the ball down the field during the game against Xavier on Wednesday, September 20, 2017 in Lexington, Ky. Photo by Kaitlyn Gumm| Staff

The weather was rainy and the pitch was slippery, but that did not stop the UK men’s soccer team from putting on a show. In their first home game in two weeks, the No. 20 Wildcats defeated the South Carolina Gamecocks 1-0 on a last-minute goal by Aime Mabika.

UK came into the match trailing the all-time series against the Gamecocks with a 6-7-3 record. The Wildcats avenged their 2-1 loss to the Gamecocks in Columbia last year, and South Carolina is still winless on the road this season with a 0-5 road record.

Once the match began, the UK offense showed they were unfazed by the wetness of the pitch. In his first start this season, midfielder Kalil El-Medkhar sped his way through defenders in the sixth minute as he shot from the left before Gamecocks keeper William Pyle made the save.

South Carolina tried to show the same tempo as forward Luca Mayr penetrated his way to the box before shooting a wide shot. The do-it-all sophomore was perhaps Kentucky’s biggest threat coming into the game as he leads the Gamecocks in goals and assists this year.

El-Medkhar made his way to the box once more in the 11th minute as he and defender Keyarash Namjoupanah both had hard kicks that were barely saved by Pyle. El-Medkhar showed his resilience as he came back less than a minute later to miss another close kick. Connor Probert tried to score the putback but Pyle was there once more.

South Carolina’s closest score came from a shot in the 18th minute by midfielder Justin Sukow. Sukow tried to strut his way to the goal before Enrique Facusse was there for the save. Facusse, the C-USA leader in goals-against-average, finished with two saves in the half.

Peyton Ericson and Mitchell Myers each had a back-to-back shot in the 20th minute that both missed. Mayr had 3 consecutive corner kicks in the 31-32nd minutes yet neither of them gave the Gamecocks any success. He also had a shot that was stopped by Facusse five minutes later.

Kentucky closed the half with a blocked shot by JJ Williams and a high header by Probert that nearly went in during the 42nd minute. Both teams came out with high offensive production as they combined for 20 shots in the half. Kentucky had 7 shots on goal and made Pyle work for his 7 saves in the half.

“You always want to be the aggressor in the game. We were just trying to take advantage of the positive momentum that we had”, midfielder Sam Stockton said. “It was nice to see us be on the aggressive and get a lot of shots early on in the game.”

As the second half opened, both teams picked up where they left off. Three minutes into the half, Mayr had a forced shot that was stopped by Facusse. Mikkel Pedersen and Probert each had a blocked shot in the 49th and 62nd minutes, respectively.

While the offensive production seemed to slow down, that was not the case on defense. Defensively, both teams played with a profound intensity in this half. They combined for 12 fouls in the half, 6 from Kentucky. This was further represented by a yellow card that was received by Gamecocks’ defender Aleksander Christensson.

Once the game reached the most important minutes, both teams were pushing hard to try and take the match. In the 86th minute, Facusse dove to stop a header by Gamecocks’ forward Trygve Elingstad. After the Cats got the ball, they saved their best performance for the last minute.

With 57 seconds left in the game, the Wildcats struck gold after Mabika made a shot off of a Probert assist. Mabika’s second goal on the year pumped up fans at The Bell as they cheered on.

“It’s the perfect goal for this kind of game. Effort and fight late in a match”, Stockton said. “Obviously we would love to score early, but just to battle through the end and be able to score like that is great.”