Offense looking to come together before playing Tennessee 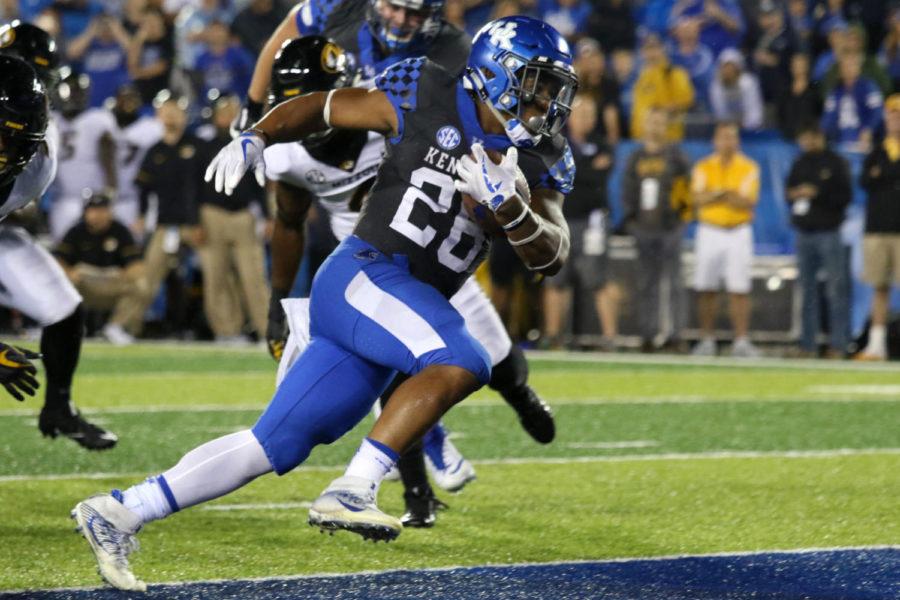 Kentucky running back Benny Snell Jr. scores a touchdown during the game against Missouri Saturday, October 7, 2017 in Lexington, Ky. Kentucky won the game 40-34.

There are many things UK football needs to improve on after their 45-7 loss to Mississippi State, one of them being the rushing offense.

The Cats were mostly contained on the ground against the Bulldogs, and now they must be better when they face Tennessee’s strong run defense this weekend. After Tuesday’s practice, offensive coordinator Eddie Gran gave his statement on what it will take to post better rushing results.

“The recipe is perfect alignment, perfect assignment, perfect footwork,” Gran said. “We did some things in the game, everywhere, that we reverted back to maybe day one or two, correcting those steps and those fundamentals and you cannot do that.”

As for the team’s top running back, Benny Snell, he posted his worst statistical outing of the season against Mississippi State, only rushing for 18 yards on seven carries.

Snell is known for putting high standards on himself, and was understandably disappointed with himself following his performance.

“I got like a mad feeling when I see numbers like that cause you know I always want to exceed my limit, exceed my level and always do my best, but it is what it is,” Snell said.

Known for putting high expectations on himself, Snell said he plans on not having another game like that.

“I know going forward, the opportunities that I get, I’ll make the most of it.”

Offense looking to come together

The rushing offense wasn’t the only unit to struggle on Saturday, as the offense entirely was only able to put a touchdown on the scoreboard.

As a response to the loss, UK is looking to come together more as a team to make sure the loss doesn’t linger into Saturday’s game against Tennessee.

“Everyone’s really on the same page, we don’t want that feeling ever again of losing,” quarterback Stephen Johnson said. “We’re all really clocking, trying to get back to our standards to what our coaches and what’ve put on ourselves to do.”

Getting back on the same page has started in team meetings and practices, where according to the Cats, the process has gone well.

“Practice has been more serious and things are have been how they should’ve been,” Snell said.

Gran said he also noticed the team coming together more in practice, which has been a nice sight coming off of the biggest loss of the season.

However, Gran also want’s to see that same mindset in the games, and if that doesn’t happen, nothing is going to change.

“Tennessee’s showing up 7:30 in that stadium right there, so you better be focused and you better be ready to go, if not, we’re going to get bloodied again,” Gran said.

After Tuesday’s practice, Vince Marrow got a chance to address the video on social media that appears to be him yelling to the players after the loss to Mississippi State.

“It was just a heated moment, didn’t know you guys were that close to the locker room, I could say that,” Marrow said. “It was just a thing where if you’ve been in any football locker room, it’s one of them deals, it was nothing more bigger than that.”

Marrow said the team has moved on from the issue and life is back to normal now.