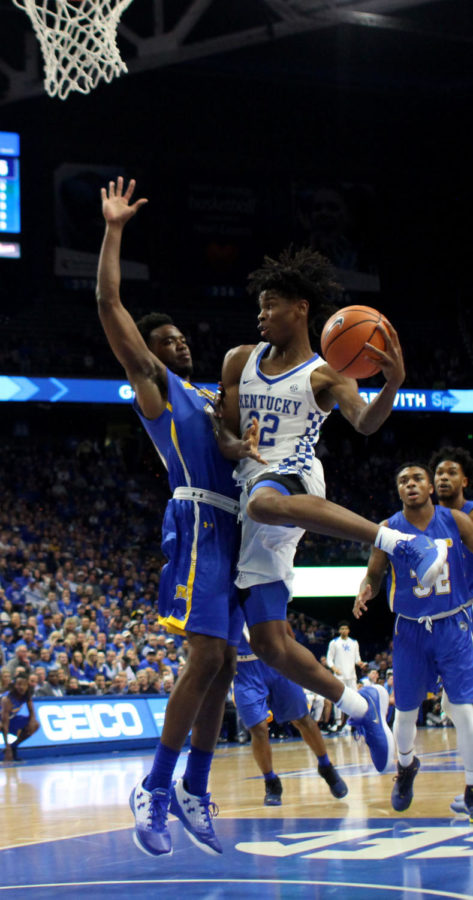 Freshman guard Shai Gilgeous-Alexander goes in for a layup during the Kentucky Cares Classic charity game against Morehead State at Monday, October 30, 2017 in Lexington, Ky. Kentucky won 92 to 67. Photo by Kaitlyn Gumm| Staff

On Monday, UK basketball’s 92-67 exhibition win against Morehead State belonged to the guards. The top three scorers for the Cats (Hamidou Diallo, Quade Green and Shai Gilgeous-Alexander) led the Cats in scoring with 60 points between them.

“The guards had to step it up,” Green said. “We weren’t rebounding. We needed our big men, so us three decided that we’ve got to do something and we came out with the victory.”

Heralded as the next great point guard under head coach John Calipari’s system, Green scored 20 points and made every shot he took inside the three-point line, as well as all of his seven free throws. He contributed to the offensive efficiency of the team by adding five assists with only one turnover.

His competition for the starting point guard spot, Canadian native Gilgeous-Alexander, contributed 17 points, four rebounds, four assists and two steals to give the Cats the win. However, when the guard play was brought to his attention, he laughed it off.

“Ah, no, we don’t worry about stats,” Gilgeous-Alexander said as he chuckled a bit. “We just try to take it to the other team and get a W.”

As big men like Sacha Killeya-Jones and Nick Richards struggled to score and rebound for a large part of the game, the guards began to take it upon themselves to take over the game. During a stretch in the middle of the second half, Green scored eight of UK’s points during an 11-0 run that gave the Cats a sizeable lead.

“I thought Shai [Gilgeous-Alexander]’s energy and his ability to deflect balls and make plays,” Calipari said. “And then I thought Quade [Green], that’s the best he’s played.”

The third guard, the only one that didn’t run the offense at some point in the game, also ended up leading the Cats in scoring. Diallo netted 23 points on 8-12 shooting and hit 50 percent of his shots from beyond the arc. He also thinks another player on the team should be listed as a guard.

If the team is counting the 6-9 Knox as a guard, then all double-digit scorers for the Cats were a part of the backcourt, scoring 82.6 percent of the team’s points against the Eagles. Knox contributed 16 points on 7-15 shooting, including several thunderous dunks.

The staple of an excellent backcourt at UK won’t be going anywhere any time soon if Monday night was any indication of how the 2017-18 season will pan out.