UK women have the tools to replace talent from last year 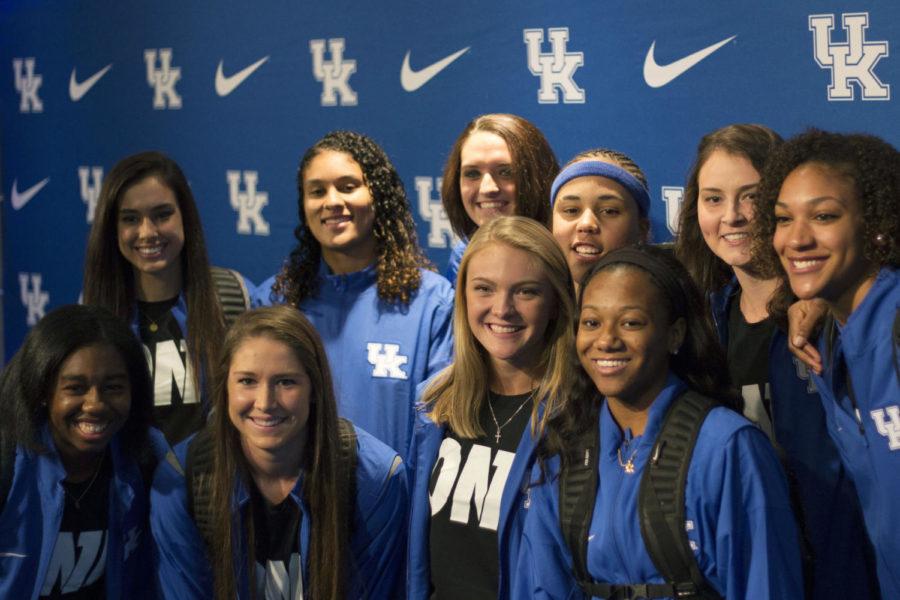 The women's basketball team on the blue carpet prior Big Blue Madness on Friday, October 14, 2016 in Lexington, Kentucky.

When the NCAA Women’s Basketball Tournament bracket was released last season, revealing that Kentucky was a four-seed in the Lexington region, the perfect storyline had been written.

If the Cats kept winning, they would play all of their tournament games in Lexington until the Final Four, a place UK has never been. They have come close, making it to the Elite Eight in 2013, 2012, 2010 and 1982, but never made it over the hump of making it to a Final Four.

Seniors Makayla Epps and Evelyn Akhator made it their goal to take Kentucky to the Final Four in front of Epps’ home-state and Akhator’s second home, but those goals weren’t achieved after the Cats were knocked off in the second round by fifth-seeded Ohio State.

The loss was a crushing one for the Cats, as the careers of two UK greats came to an end in a sudden moment. The sting from the loss has since worn off, but the Cats are still tasked with replacing two of the best players in program history from last season.

Despite the loss of Epps and Akhator, the Cats still return a lot of talent that played significant roles last season. A mix of experienced returners and talented freshmen make up this year’s team that doesn’t plan on dropping off anytime soon.

Taylor Murray, Maci Morris and Alyssa Rice will likely be the leaders and best players for this year’s team. Murray had a breakout last season alongside Epps, where she averaged 12.2 points per game behind Epps and Akhator.

Morris will occupy Murray in the backcourt as arguably the teams best shooter. Rice will be one of three seniors on the roster, and will look to fill-in the role Akhator possessed last year.

Makenzie Cann, Jaida Roper, Ogechi Anyagaligbo and Jessica Hardin are all returners from last year’s team who will likely step into a bigger role this season.

As for the recruiting class, the Cats added five new players in the offseason, including four freshmen who are at least three-star prospects according to ESPN.

The highest rated freshman is Keondra McKinney, a four-star prospect from Knoxville, Tennessee. McKinney averaged a double-double her senior season and led Fulton High School to 27 wins and a state tournament appearance.

One of those five new players is Amanda Paschal, who is a junior-college transfer from Gulf Coast State College. In her freshman year, she was a part of the GCSC team that won the National Junior College Athletic Association National Championship. The last time that UK had a player who won the NJCAA national championship was Akhator.

The Cats have some major holes to fill with the departures of Epps and Akhator, but head coach Matthew Mitchell has talented players to work with on the roster. With good coaching and good players, the Cats seem set on having another good season.