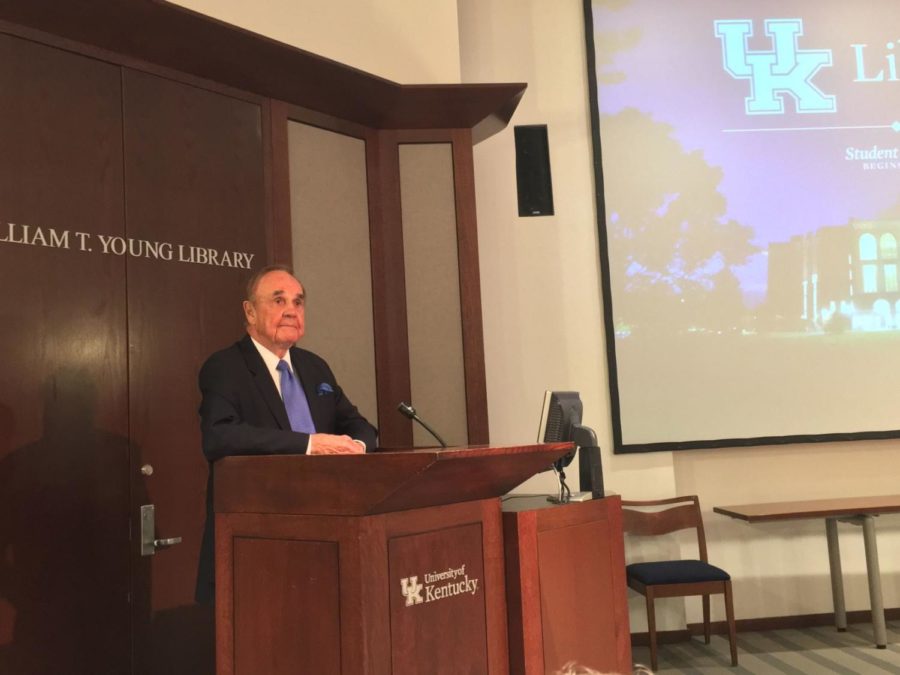 The UK School of Journalism and Media hosted Dick Enberg at the UK Athletics Auditorium of the William T. Young Library on Wednesday night.

Enberg spoke before a crowd of students, faculty, sports journalists and sports promoters.

Tom Hammond, American sportscaster for NBC Sports Television, enthusiastically introduced Enberg. He noted all of Enberg’s achievements, and praised him for the man he is underneath it all.

When Enberg came to speak, he was nothing short of entertaining with humorous stories of sitting on a microphone.

He continued his speech with many stories of his years in television and his experiences of people recognizing him.

In one story he shared, a woman told him that he sure “resembled himself.” Enberg thinks of this story regularly and wanted students to know that “no matter what your path is in the future, I hope you can resemble yourself.”

“No one walks the mountain alone,” Enberg said, “You have all of these people around you. Me, the staff at UK, your peers, we’re all here and want each other to succeed.”

Enberg challenged his audience to not only have hope and be true to yourself, but also to be kind.

“Life is so much better when you are,” he said. “By just saying ‘thank you,’ who knows what lives you’ve changed? Who knows how you’ve changed your own life?”

The speech was made possible through a gift of the Gidel and Lombardo families to honor Rob Gidel, a 2006 graduate of the UK School of Journalism and Media.