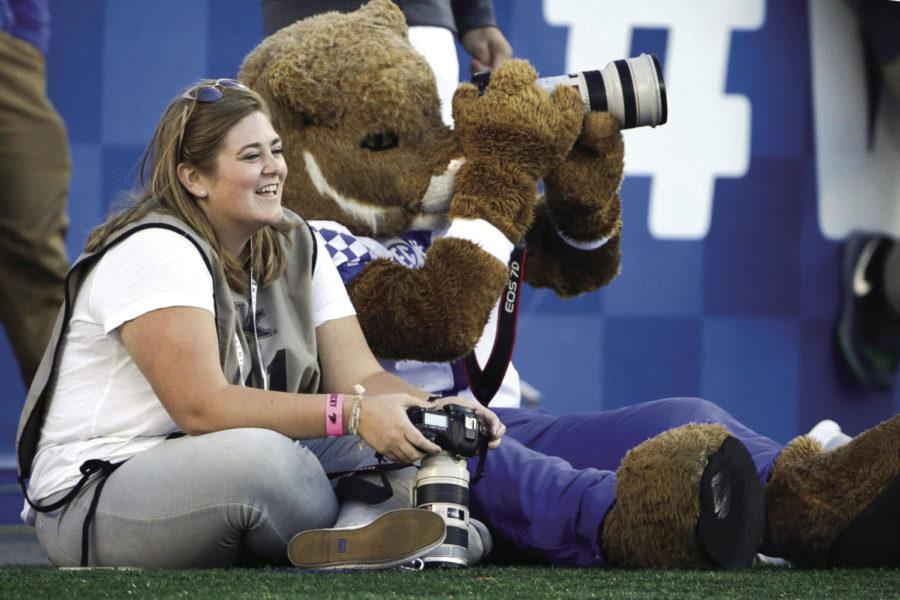 Kentucky Kernel photo editor Arden Barnes is joined on the sidelines by the Wildcat mascot during the second half of an NCAA college football game against Eastern Michigan Saturday, Sept. 30, 2017, in Lexington, Ky. Kentucky won the game 24-20. (AP Photo/David Stephenson)

Arden Barnes had been assistant photo editor for the Kentucky Kernel for a few months when she noticed and read the many notes pinned on a bulletin board in the newsroom.

She asked then editor-in-chief Marjorie Kirk what the story behind them was.

The notes were from student newspapers, personal relations employees and more from all over the country, offering comfort to the Kernel staff after it lost one of its own.

Jonathan Krueger was shot and killed in April of 2015. He was the Kernel’s photo editor at the time.

The Jonathan Krueger Memorial Scholarship was created by Kernel Press Inc. Most of the funds come from a GoFundMe account created by former Kernel photographer Jonathan Palmer and his wife, Danielle, according to a past Kernel article.

The GoFundMe account began with a goal of $10,000. The fund reached $30,201, allowing the creation of an endowed scholarship for one Kernel photographer each year. This is the third year of the scholarship.

Barnes is currently the photo editor for the Kernel and has been chosen to receive this year’s scholarship.

Mary Krueger, mother of Jonathan, said she cannot express how much it means to his family for this scholarship to be named in his honor. She said she is “forever thankful” to Palmer and all those who donated.

“I’m still writing thank you notes,” she said. “I still get a handful of gifts for the scholarship; some are strangers to me.”

Mary said she is a faithful Kernel reader.

“I’ve been watching Arden’s work,” she said. “I saw some great photos that she did at the new barn, beautiful pictures.”

Barnes said she became serious about photography during her sophomore year at Lexington Catholic High School. She commuted from Cynthiana to attend school there.

“I took a photography class as an art requirement, and they told me I had a talent for it,” she said. “I eventually starting practicing more and started taking more photos, and I realized I really liked it and had a passion for it.”

Barnes did not immediately come to UK to pursue photography, however. She was originally going to attend the Savannah College of Art and Design, but she decided to come to UK as a human health and sciences major, pre-physical therapy.

She switched majors after a year “because I’ve had that passion for photography for forever,” she said.

Barnes said that while she wants to be a photojournalist, she is not exactly sure of the specifics.

“The wide range of Kernel assignments helps me figure out what I want to do,” Barnes said. “I really like working for the Kernel and everything it entails.”

“Arden’s talent, attitude and leadership perfectly reflect the qualities we look for in our leaders at the Kernel,” Stephenson said.

Mary said she remembers the day Jonathan called her about his first visit to the Kernel office, when he got his first photo assignment.

“I think Jonathan would be tickled to see that there are still students coming in the door that want to pursue photography,” she said.

She said she would “give anything” to be watching her son pursue his dreams rather than talking about a scholarship named in his memory.

The recipient of the scholarship is chosen by the Kernel board’s executive committee and is worth $1,000 each semester.

Fittingly, Barnes said she plans to use the money to buy a new camera lens.