Kentucky heads to Music City to take on Vanderbilt 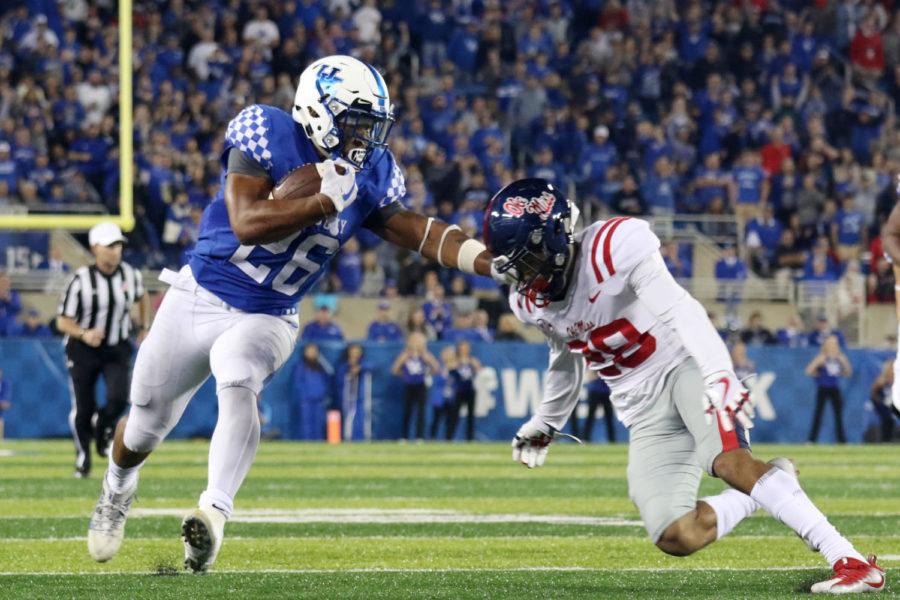 Kentucky running back Benny Snell Jr. runs the ball down the field during the game against Ole Miss on Saturday, November 4, 2017 in Lexington, Ky.

The Kentucky Wildcats (6-3, 3-3) are heading on the road this week as they travel to Nashville to take on Vanderbilt (4-5, 0-5). Kentucky is looking to bounce back after a heartbreaking 37-34 loss to Ole Miss on a last-second touchdown catch by the Rebels.

The Commodores are coming off of their first win in over a month after defeating Western Kentucky 31-17. The home team in this series has won each of the last four meetings.

This game will feature a matchup of star running backs. Benny Snell Jr. will carry most of the workload for the Wildcats out of the backfield.

Snell is already UK’s ninth all-time leading rusher as a sophomore and only needs 12 more yards to be at 2,000 for his career. Last season against Vanderbilt, Snell was able to lead the Cats in rushing on a day when four Wildcats got at least 54 yards against the Commodores.

The Commodores have an elite running back of their own, led by senior Ralph Webb. Webb is coming up on 4,000 career rushing yards and is already one of the top-10 leading rushers in SEC history.

Last week against Western Kentucky, Webb rushed for his eighth touchdown of the season, giving him 31 for his career and breaking Zac Stacy’s school record. Not only does Webb lead the team in rushing, he also leads the Commodores in scoring.

Last season against the Cats, Webb led both teams in rushing yards with 100 yards. It was his second consecutive year of at least 100 yards rushing against Kentucky.

Kentucky will put its heralded “Blitz Bros,” Josh Allen and Denzil Ware, in charge of stopping Webb this week. Allen and Ware are both top-seven on the team in total tackles, and rank first and second in tackles for loss and sacks.

These two have led the Wildcats to the 28th rushing defense in the nation, allowing only 128.8 yards per game. Another Wildcat that will be responsible for helping stop Webb is All-SEC linebacker Jordan Jones.

Jones missed four games this season to injury, but looked good last week against Ole Miss. Jones recorded eight total tackles against the Rebels, including three tackles for loss and a sack.

The game kicks off at 4 p.m. ET Saturday at Vanderbilt Stadium and will be broadcast on the SEC Network.