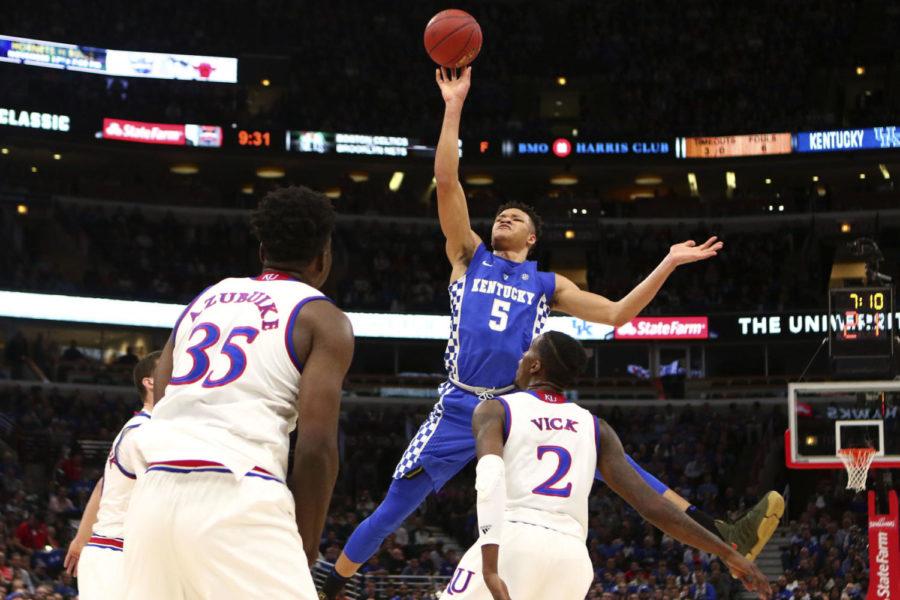 Kevin Knox shoots a floater in the lane against the Kansas Jayhawks at the United Center in Chicago, Illinois on Nov. 14, 2017.

UK basketball forward Kevin Knox couldn’t miss (20 points, 7 rebounds) on Tuesday night, but UK couldn’t get the win as the No. 7 Cats were defeated by the No. 4 Kansas Jayhawks in the State Farm Champions Classic, 61-65.

The game was the team’s first real test against a top national powerhouse after defeating Utah Valley and Vermont in their first two games of the regular season.

In their third game in five days, the Cats traveled to the United Center in Chicago to take on the team that bested UK in their last two meetings. Featuring hot-shooting forward Svi Mykhailiuk (17 points, three rebounds, three assists) and 283-pound center Udoka Azubuike (13 points, 100 percent FG, 8 rebounds), the Jayhawks set out early to dominate the Cats.

After the game was tied early, Kansas went on an 11-0 run to take an 18-7 lead early in the first half. Knox and the Cats responded by outscoring the Jayhawks 26-16 to close out the half, cutting the Jayhawk lead to just one.

During the Cats’ large run, Knox hit two threes and scored nine points on his way to becoming the game’s first double-digit scorer. Forward Sacha Killeya-Jones and guard Shai Gilgeous-Alexander contributed on the defensive side of the floor, as they respectively contributed three blocks and two steals in the first half.

As the second half began, the game was much more tightly contested. No team extended their lead to double digits throughout all of the second half, and no player seemed immortal, like Duke’s Grayson Allen in the game held right before the Cats took the floor.

UK saw foul trouble near the beginning of the half, as center Nick Richards and forward Wenyen Gabriel picked up three fouls each with more than ten minutes remaining in the game. This forced head coach John Calipari to substitute forward P.J. Washington in the game, who shot 0-3 and committed 4 turnovers in the game.

With a minute left, the Jayhawks had the ball and a 61-59 lead. The UK defense swarmed ballhandler Graham and forced a shot clock violation to take possession with 33.6 seconds remaining. As the play was dead, rivaling chants of “Go Big Blue” and “Let’s Go Jayhawks” could be heard across the United Center as Gilgeous-Alexander walked the ball up the court.

Knox got the ball on the baseline and drove, trying to hit a floater, but to no avail. His shot missed, and the Cats had to foul Malik Newman to stay in the game. Newman hit both foul shots, and Killeya-Jones made a basket at the other end to bring the game back within two with eight seconds remaining.

Gilgeous-Alexander fouled Graham on the next play to stop the clock, but the Jayhawks had fixed their poor free throw shooting from earlier in the game as Graham made both, cementing the final score for the Jayhawks.

The Cats will look to take on East Tennessee State at home on Friday at 6 p.m.