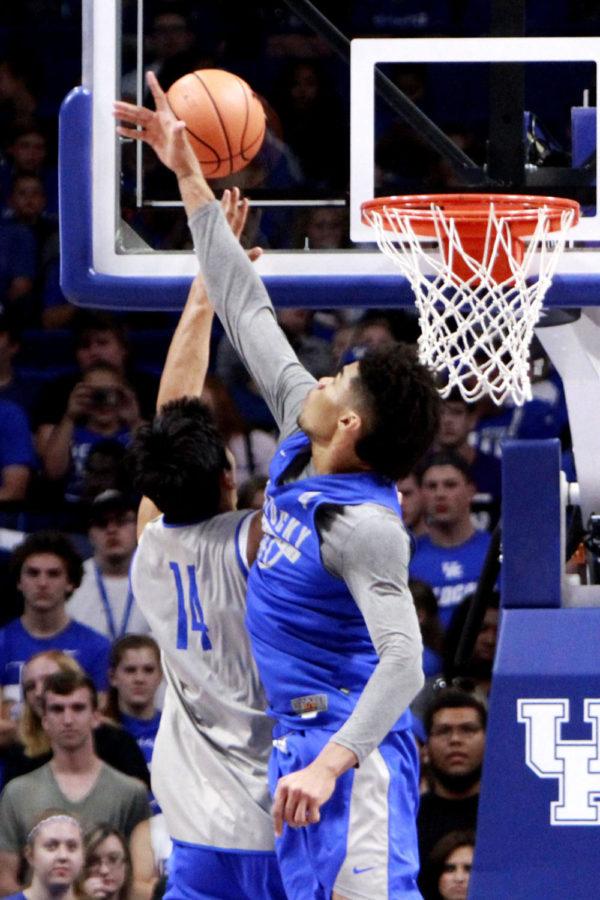 When Tai Wynyard checked into the game for the first time against Morehead State, he was wearing something that fans aren’t used to seeing, a mask over his face.

Before getting ready for another exhibition game against Centre College, Wynyard got the chance to tell his story of why he was wearing the mask.

“This man over there (pointing at Nick Richards) elbowed me, broke my nose and they wouldn’t let me play without a mask,” Wynyard said.

Watch: Wynyard explains how he broke his nose

Wynyard said the injury occurred in the Blue-White game, when he was victim to Richards’ flailing wingspan. Wynyard admitted the injury wasn’t a pleasant one, as expected with any type of accident.

“It’s pretty painful when you get hit in the face or something like that, especially when last year the same thing happened to me, he actually hit the same side,” Wynyard said.

However, if you ask Richards, he said Wynyard’s broken nose had nothing to do with him.

Richards said he knows that he has an issue controlling his body, and is doing what he can to prevent future accidents from happening.

“I’m really aggressive on defense, I take a lot of pride in that,” Richards said. “It’s just something I got to get used to, I just got to learn how to control my body more, that just takes a lot of practice, a lot of work to be honest.”

Assistant coach Joel Justus even admitted that he has been hit by one of Richard’s elbows in practice before. As annoying as it might be to get hit in the head by an elbow, Justus is accepting the fact that Richards is still learning how to play college basketball

“I think when you have young guys that are being forced to extend themselves to a place that they have never been challenged to go, you’ve got to live with it,” Justus said. “I think that has been a fun part for our staff, I think as assistants and I think Cal (John Calipari) would say the same thing.”

While Richards works on controlling his body more, Wynyard isn’t expected to miss any additional time because of his broken nose. However, it’s possible he could still be forced to wear the mask for the next couple of games.