Experience is more effective than talent in college basketball 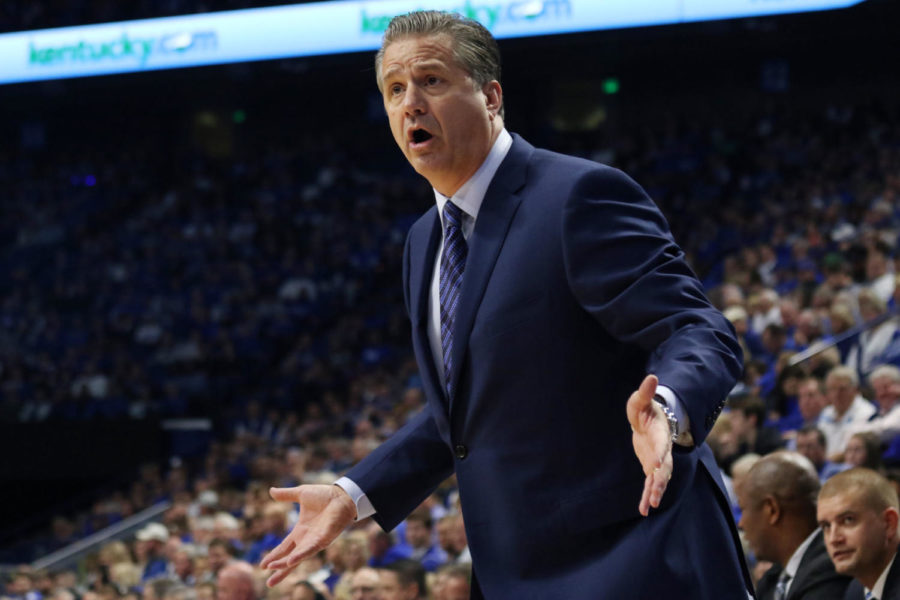 UK head coach John Calipari yells from the sideline during the game against Utah Valley on Sunday, November 12, 2017 in Lexington, Ky. Kentucky won the game 73-69. Photo by Hunter Mitchell.

Experience is more effective than talent in college basketball.

All season long, head coach John Calipari has told UK basketball fans to have patience with this year’s team, as he’s tasked with replacing over 90 percent of last year’s scoring with a bunch of freshmen.

The ultimate goal for the Cats this year is to win the national championship, but is that achievable with so much production needing to be made by 18- and 19-year-olds? This year’s team definitely has the talent to win, but they’re missing one key ingredient for success– experience.

Out of the players with significant roles, six of the nine players are freshmen. That doesn’t include injured freshmen players Jarred Vanderbilt and Jemarl Baker, who when they return, expect to have roles.

This is by far the youngest and least experienced squad Calipari has ever coached. Calipari is accustomed to coaching young teams, but usually his past rosters have included some upperclassmen, who led them to becoming thriving powerhouses in college basketball.

Of the four Kentucky teams that Calipari coached to a Final Four, three at least had two juniors or one senior that played 15 minutes or more. The only year that wasn’t the case was in 2014, when the Cats were the eighth seed in the NCAA Tournament and it took Aaron Harrison to get Kentucky to the National Championship.

Calipari’s four Kentucky teams that didn’t make the Final Four were mostly led by freshmen and barely had any upperclassmen to lead them to college basketball’s biggest stage.

Calipari’s teams have thrived the most when there’s a healthy mix of young talent and experienced players. The years when the team relied on freshmen to win the whole thing usually ended in Kentucky fans going home sad.

But enough about Kentucky, how about the teams who actually won the national championship in each of the five years? Were they loaded with young talent, or what is just a bunch of mid-talent players who gelled and improved over their careers to become champions? History points to the latter.

Eight of the last 10 Final Four’s Most Outstanding Player were upperclassmen, with the two underclassmen being Duke’s Tyus Jones in 2015 and Kentucky’s Anthony Davis in 2012.

We have seen a couple of instances where talent beats experience, but Kentucky doesn’t have an Anthony Davis on this year’s team. They have talented players like Kevin Knox and Hamidou Diallo, but no Anthony Davis.

So if it came down to a solid experienced team versus Kentucky in the Sweet 16 or Elite 8, give me the former every time. Kentucky certainly has the talent to win it all, but national championship contenders always have experience, and Kentucky doesn’t have that.