Finding motivation is easy for UK’s offense during rivalry week 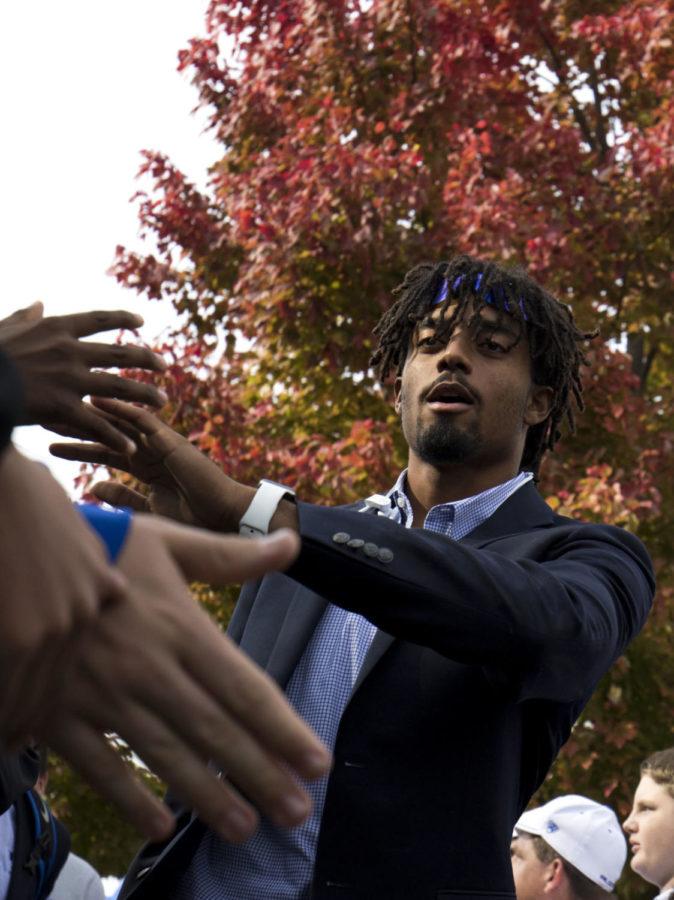 Stephen Johnson #15 of the Kentucky Wildcats high fives fans during the Cat Walk prior to the game against Vanderbilt University on Saturday, November 11, 2017 in Nashville, Tennessee. Photo by Arden Barnes | Staff

That source is beating UK’s biggest rival, Louisville, and after Tuesday’s practice, UK’s offense got a chance to talk about the big game.

“Everyone’s already hyped for it, ready to go,” Stephen Johnson said. “Hoped we’d be playing tomorrow, but we got to wait a few days.”

The offense said the practices this week have felt different, but it’s also felt different because of the holiday and the shorter week of school.

Despite the extra distractions, offensive coordinator Eddie Gran is pleased with his offense’s mentality this week.

“I think this whole week is different being that it’s Thanksgiving,” Gran said. “There’s no school tomorrow, there was a lot of – I love the attitude, came out with a lot of juice.”

While the players are likely happy to get a couple days off of class, the main thing on their mind is defeating Louisville.

The win would arguably be the biggest win of the season so far, and would give the Cats some positive momentum heading into their bowl game in December.

However, Johnson thinks a win over Louisville would give the Cats much more than just momentum.

“It’s Kentucky-Louisville, it’s for that Governor’s Cup sitting right over there,” Johnson said. “It’s really big, not just for afterwards but just for the moment right now.”

Offense hoping to send seniors off with a win

Saturday’s game against Louisville will be the final time the seniors for UK football will take the field, such as Charles Walker and Johnson.

“Right now I’m not really thinking about it too much,” Walker said. “I think definitely when I step foot on the field, that’s when it’ll probably come, or honestly maybe not even until after the game.”

Walker got to play four years at a school that was close to him, and Garrett Johnson said after Tuesday’s practice that Walker is the most likely to break down.

As for Stephen Johnson, it’ll be his final time stepping onto Kroger Field after two years of play. Despite the shorter time spent at UK, Johnson expects Saturday’s senior festivities to be emotional as well.

On top of the ceremony, the Cats also have a big game to prepare for, plus the bowl game in December. The ceremony will be a sweet moment, but winning their final two games would be ever sweeter for the seniors.

“We’re getting ready to go to back-to-back bowl games, we’ve still got a lot ahead of us,” Gran said. “Got a chance to win a couple more games and that’s how we’re going to send them out, we’re working hard to get that done.”

For the first time all year, the Cats will take the field without their top tight end C.J. Conrad, as the junior injured his foot against Georgia and is out for the year.

The Cats will certainly miss his talent on the field, but what they’ll miss the most can’t be found in the box score.

“I remember talking to him last night before he got surgery, he really told me about him, he said, ‘You know, Coach, I don’t really care about me, I just want to play for the seniors,’” tight ends coach Vince Marrow said. “That’s the part that really you’re going to miss with him but I think all our guys are going to go out and play for him.”

However, the Cats will have to move on without Conrad, and will look to Greg Gart and Justin Rigg to fill the shoes.

Marrow is confident that the Cats will perform well with whoever takes the field.

“I can tell you this, all them guys are going to be ready to play, whether we got 10-personnel or 12-personnal or 11-personnel, the guys are going to play hard for C.J.,” Marrow said. “He mean that much to a lot of guys on this team.”