Mitchell thinks there is something special about UK players 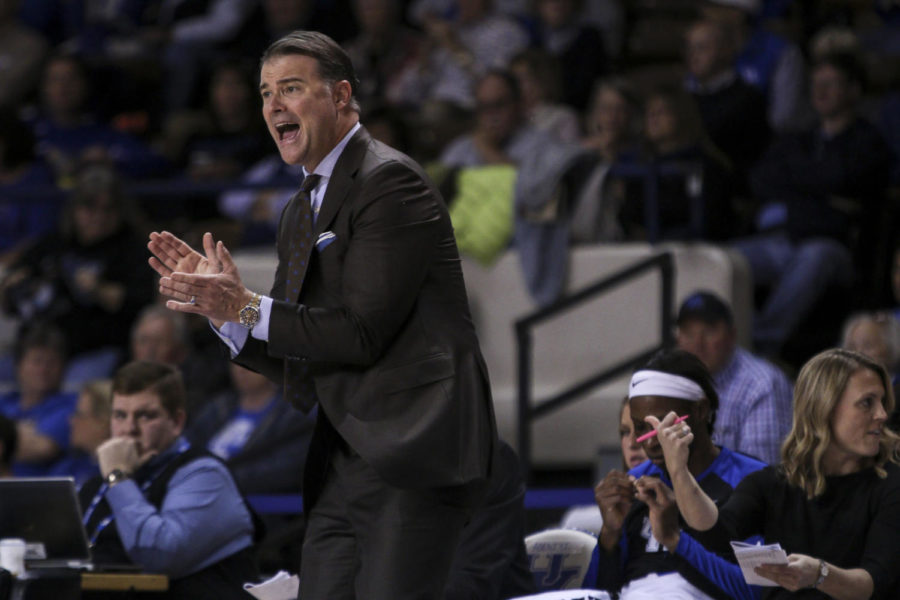 Kentucky Coach Matthew Mitchell yells from the sidelines during the first half of the Wildcat's game against the Colorado Buffaloes at Memorial Coliseum on Sunday, November 22, 2015 in Lexington, Kentucky. Photo by Taylor Pence

Matthew Mitchell has one dream he wants fulfilled before his head coaching career at UK ends.

It’s not to win a national championship or be named the NCAA’s Coach of the Year; it’s instead to have a roster full of in-state players.

“We would love to have a roster full of Kentuckians, that would be my dream,” Mitchell said. “It hasn’t happened yet and I don’t know that it will. Kentuckians are highly valued in recruiting.”

Mitchell currently has four players from Kentucky on his roster, while the rest of his players expand out as far as Miami, Florida. The number of Kentuckians on the roster is down from last season, as last year’s squad had six players based out of Kentucky, including Makayla Epps.

There’s many reasons why Mitchell wants a lot of players from Kentucky on his roster, but he just feels like a Kentuckian is treated differently when they take the court.

“We have had tremendous support and we are always excited when the Wildcats do well, but it is just a little different when a three-pointer goes in from a Kentucky kid,” Mitchell said.

Mitchell used Jessica Hardin as an example. Hardin is from Monticello, Kentucky, and played in her first season for Kentucky last year after being just a regular student her sophomore and junior years at UK.

“I think everybody was excited and she was a pretty amazing story last year, but I do think people were a little more proud because she was from Kentucky,” Mitchell said of Hardin.

The Cats recently added another Kentucky kid to their roster when 6-0 guard Blair Green singled her national letter of intent to Kentucky on Nov. 8. Green is a four-star recruit who currently goes to Harlan County High School in Harlan, Kentucky.

Mitchell went above and beyond in his recruitment of Green, as he did something with Green that he hadn’t done, and probably will never do again for a recruit: go zip-lining.

“That just shows my deep admiration and love that I have for Blair Green,” Mitchell said. “That was not the top of my choices that we would spend the day doing.”

Green was already committed to UK when the pair, plus Green’s parents went zip-lining, but it none the less solidified Green’s commitment to UK, giving Mitchell another in-state player on his roster.

As much as Mitchell loves his Kentucky players, he has no preference of where a player is from. As long as the recruit has a high-character and is talented at basketball, Mitchell will likely do what he can to convince that prospect to come to UK.

“We just want people who are interested in that and interested in coming here and being a giver and a great teammate and maybe sacrifice some personal gain for the team to do well,” Mitchell said.