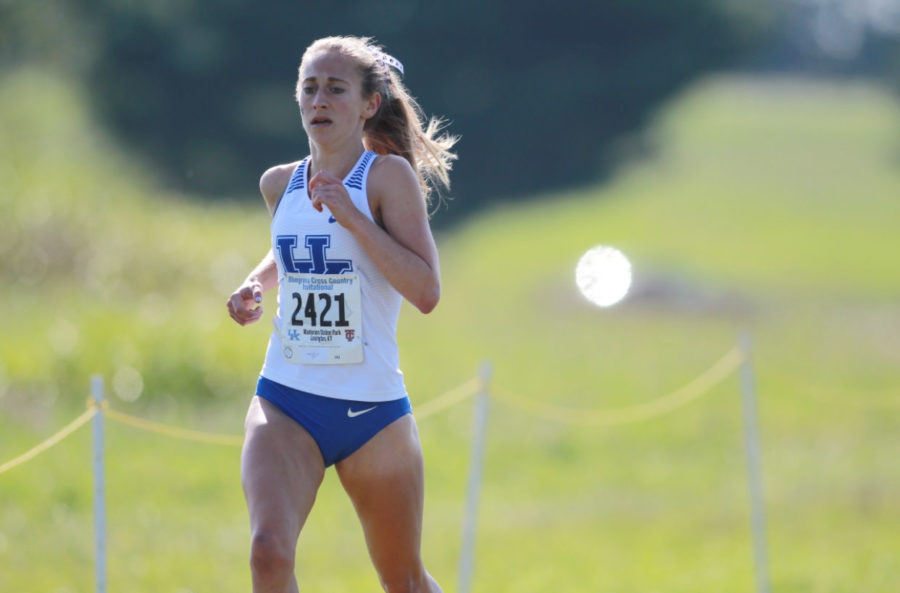 Katy Kunc runs in the 2017 Bluegrass Cross Country Invitational in Lexington, KY., which she went on to win. Kunc will be racing in the 2017 NCAA Cross Country Championships on Saturday, Nov. 18, 2017. Photo provided by UK Athletics.

Kunc qualified for nationals after placing ninth at NCAA Southeast Regionals. This is the second consecutive year that Kunc will run at the national meet.

“I’m going to have a lot of family and my whole teammates are going to be there since its super close to campus,” Kunc said. “I’m really excited and planning on doing better than last year.”

At last year’s NCAA Championships, Kunc placed 33rd, which earned her All-American honors. Kunc said her goal for this year’s nationals is to place in the top 20 to 25.

A big benefit Kunc gets this year compared to last year is racing closer to home, as nationals in 2016 was in Terre Haute, Indiana. Kunc has run at E.P. “Tom” Sawyer Park many times, and will have friends and family lined up all along the course to cheer her on.

However, the course Kunc will race on this Saturday is slightly different than the one she’s used to, but she’ll get the chance to preview the course during her pre-race shakeout run on Friday.

An area of the race that Kunc has put some emphasis on is the start. With more than 250 runners all starting at the same time at a high speed, the race can be lost from the beginning if a runner gets off to a bad start.

“I think if I just go out with confidence once the gun goes off, all the nerves kind of go away,” Kunc said. “I think if I position myself early it’ll be good from there.”

That could be easier said than done, as Kunc will be racing the best college runners in the country, and they two will have the goal of getting out to a fast start.

Kunc has had a chance to evaluate the competition field and thinks the talent this year is deeper compared to the last. Despite the challenge, Kunc looks forward to racing the top runners in the country.

However, even with the tough competition, Kunc will be motivated to run her best since it’s her last cross country race as a collegiate. Kunc is a senior and will only have a track season of eligibility remaining after nationals.

“Right now it seems like a normal race, I think when I’m in the race I’ll actually be like, ‘Wow, this is my last cross country race, I have to give it my all right now,’” Kunc said. “I think it’ll definitely help me during the race knowing it’s my last race.”

Kunc’s final cross country race will start at 9 a.m. ET and will be broadcasted on Flotrack.com. A subscription is required to watch the race.