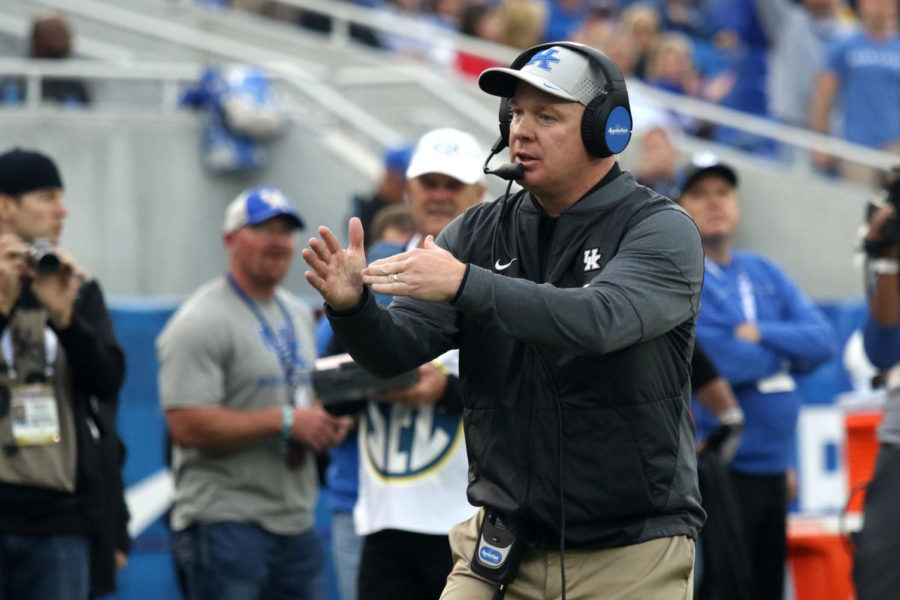 UK head coach Mark Stoops calls a timeout during the game against Ole Miss on Saturday, November 4, 2017 in Lexington, Ky.

Once Ole Miss wide receiver D.K. Metcalf caught Jordan Ta’amu’s pass with five seconds remaining, Big Blue Nation collectively held its breath. When the replays filed through, there was a clear gap between the out-of-bounds area and Metcalf’s left foot.

The touchdown was confirmed and the Rebels defeated Kentucky by a score of 37-34. The loss dropped Kentucky to 6-3 overall with a .500 conference mark at 3-3. With only three games left on the schedule, the Wildcats will travel to Nashville to face Vanderbilt, who is still seeking its first conference win this season.

After another devastating loss, Kentucky head coach Mark Stoops said he is ready to move on and focus on the Commodores this week.

“There’s quite a few things we need to do better,” Stoops said. “We’re excited to get back to work and go down and compete against Vandy on the road and trying to get that seventh victory.”

Vanderbilt snapped its five game losing streak against Western Kentucky after holding the Hilltoppers to a rushing total in the negatives. Benny Snell Jr., the SEC’s leading rusher, will look to flip the script against the Commodores this Saturday.

Despite the heavy workload, Stoops said he is amazed by Snell’s ability to recover quickly.

“He’s a strong guy,” Stoops said. “It takes an awful lot for him to get worn down, I think. From some of the testing we’ve done with him in the offseason and all that, he’s amazing the way he recovers.”

Four of Kentucky’s six SEC games this season have been decided by six points or less. The Wildcats are 2-2 in those games.

Stoops expects another dogfight against Vanderbilt this week.

“Sound in what they (Vanderbilt) do,” said Stoops. “They keep you off-balance offensively. They’re good at what they do.”

Stoops said there are some similarities between his team’s offense and Vanderbilt’s offense.

“Offensively they’re like us in that they are efficient in what they do,” said Stoops. “Pick their spots when they take their shots.”

Kickoff between the Cats and the ‘Dores will take place on Saturday, Nov. 11 at 4:00 p.m. at Vanderbilt Stadium on the SEC Network.