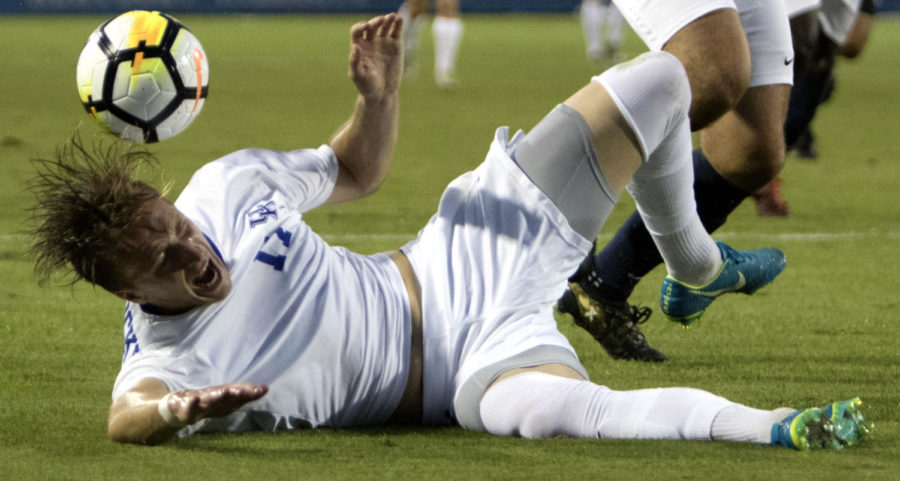 Sophomore Connor Probert gets fouled in the box during the game against Xavier on Wednesday, September 20, 2017 in Lexington, Ky. Kentucky tied Xavier 1-1. Photo by Carter Gossett | Staff

Searching for their first ever Conference-USA championship, the No. 3 seeded UK men’s soccer team was in Norfolk, Virginia, Wednesday hoping to win their opening match of the tournament. Unfortunately for UK, their hopes came to a sudden end after being upset by the Marshall Thundering Herd 1-0.

This marks Marshall’s second win against UK this year. Earlier, on Oct. 14 in Charleston, West Virginia, the Thundering Herd defeated Kentucky by the same 1-0 score.

Marshall came into the match playing as an underdog, the No. 6 seed in the tournament. They will advance to play either Old Dominion or South Carolina in the semifinals. UK now has a 8-6-4 record this season.

Looking to keep up their recent success against the Cats, Marshall made an impact statement in the 14th minute. Midfielder Dion Stergiotis kicked a previously deflected ball into the goal to give the Thundering Herd a 1-0 lead.

Despite the setback, the Cats were more determined than ever to keep their tournament hopes alive. The offense lit up the rest of the first half with a whopping 13 shots, seven of them on goal. Even though the offense showed persistence, Marshall’s Nate Himes protected the Marshall lead with seven saves.

The second half was no different as UK fought to try and come up with the equalizer. In the 63rd minute, the Cats looked like they were about to tie the game as they were constantly encroaching the Marshall back line. However, they could not get off the shot they wanted and missed yet again.

Noah Hutchins tried to finish off another offensive attack with a high shot from outside the box in the 75th. Still, the recurring theme of missed opportunities was shown again as he shot wide.

Reaching a point of desperation in the 86th minute, UK tried to thread a tight corner kick that was cleared. Hutchins tried to step up once more a minute later. by crossing the ball into the box to Kalil ElMedkhar. ElMedkhar, who tried to head the ball, had his shot saved by Himes.

Kentucky will have to now sit and wait to see if they will receive a bid to the NCAA tournament for the fourth consecutive season. If they receive a bid, it will be a very close one. Last year, UK lost to Creighton in the NCAA Tournament’s second round at The Bell last November.