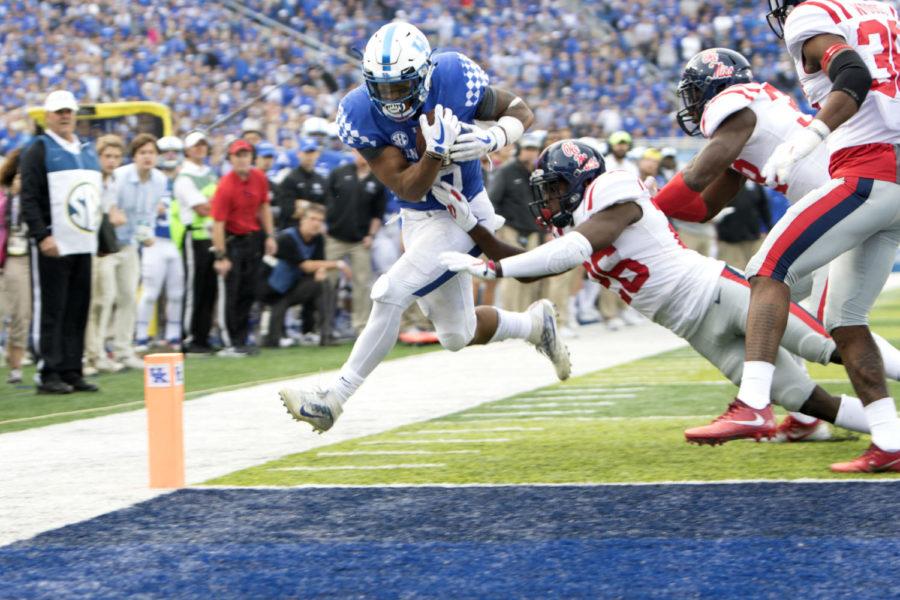 Kentucky running back Benny Snell Jr. is pushed out of bounds right before scoring a touchdown during the game against Ole Miss on Saturday, November 4, 2017 in Lexington, Ky. Kentucky lost the game 37-34. Photo by Carter Gossett | Staff

Benny Snell Jr. has not-so-subtly reminded fans that the Kentucky offense still runs through him.

After rushing for 116 yards and 3 touchdowns against Vanderbilt, Snell broke the school record for rushing touchdowns by a single player. He’s been the hammer the Cats have needed in the red zone this year, and the guy whose number they call on to close out games.

Snell is already up to 1013 yards this season through 10 games, just 78 fewer yards than his Freshman season total. His 15 touchdowns have already surpassed his 13 from last year.

The only thing that could seemingly slow Snell down at this point would be the flow of the game. In the Cats’ blowout loss at Mississippi State in week 7, Snell logged only 7 carries for 18 yards – a season low in both columns. Since that loss, he has erupted for 472 yards and 9 touchdowns in the last 3 games. Offensive coordinator Eddie Gran says it was after that loss at Mississippi State when he and Snell worked out some of the kinks.

“After about 7 games, we just did a comparison… I just kind of shared with him some information and the information he saw, and we talked about it and how it could get better and what it might do, and he takes coaching very well,” said Coach Gran after practice Tuesday night.

Even Snell can see where things are going right for him and the offense.

The results are reflected in the win column. UK has already matched its victory total at 7 from last season, still with 3 more games to go.

UK will have to jump on Georgia early in order to be able to establish the run game, but Snell says he’ll be up to the challenge against the seventh-ranked team in the nation. Georgia allows the fifth fewest yards per game in the nation with 103.8.

Georgia is coming off a 40-17 upset loss at now-No. 6 ranked Auburn last week, their first loss of the 2017 season. They had previously been ranked No. 1 in the country.

The Wildcats will face off against the Bulldogs this Saturday in Athens at 3:30 p.m., and the game will be televised on CBS.