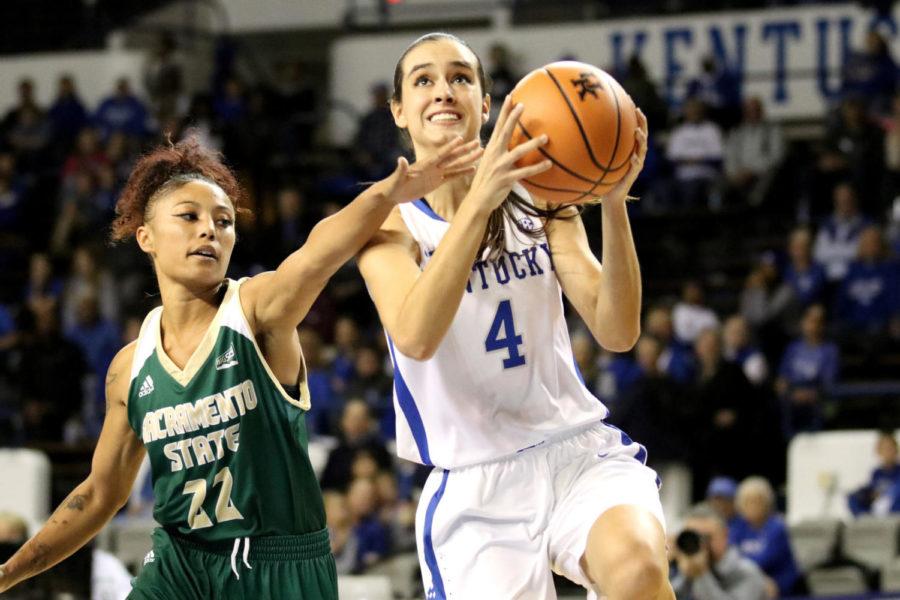 Kentucky guard #4 Maci Morris goes in for a layup during the game against Sacramento State on Friday, November 10, 2017 in Lexington, Ky. Kentucky won 101-70. Photo by Chase Phillips | Staff

On Thursday, Nov. 20, the UK women’s basketball team will face the Baylor Bears. Heading into this matchup, the Cats are ranked at No. 20 while the Bears hold on to a top-10 spot, coming in at No. 9.

The Cats are undefeated and hope to keep this streak going against Baylor. The Bears hold a record of 5-1, with their only loss being on the road to UCLA. They will look to keep their perfect home record intact after the matchup against UK.

The last time these two teams went head to head was in 2014 when the Cats hosted Baylor at Rupp Arena and took down the Bears 74-64.

The Cats are being lead this season by senior Alyssa Rice and juniors Maci Morris and Taylor Murray. Rice scored her first double-double of her career in the last game against Marshall. With time to recollect during the four-day break the ladies were given, Rice could threaten for another double-double against the Bears.

With Morris averaging 15.3 points per game and Murray consistently keeping her number high, the Cats will have a chance to upset Baylor when they walk into the Ferrell Center.

The Bears have broken the 100-point mark five times this season, including their exhibition games, so the Bears’ offense will likely be the biggest challenge UK has faced all year.

One of the advantages that Baylor’s leaders have over the whole Kentucky team is their height. Junior center Kalani Brown stands at 6-7 and averages 24.2 PPG.

Brown has played for the USA Women’s National team plenty of times and is on the 2017 Naismith Trophy Watch List.

Sophomore forward Lauren Cox averages 17.4 point per game while standing 6-4. Cox has also competed with the USA Women’s national teams and was named to the Big 12 All-Freshman team last season.