Second half spark fueled by zone defense and efficient shooting 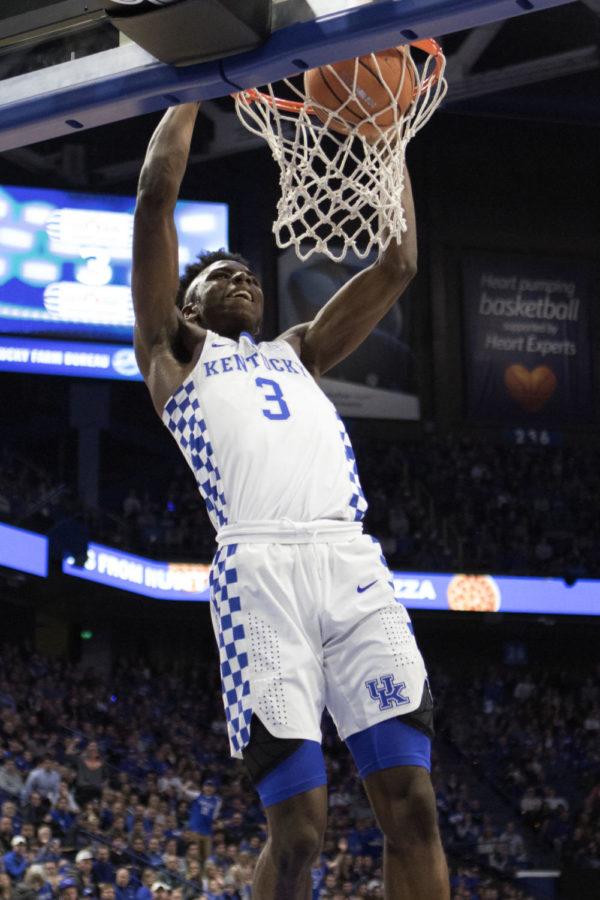 John Calipari’s words of wisdom at halftime and a switch to zone defense resulted in a drastic spark in the young Kentucky Wildcat team after a not-so-promising first half.

In the first 20 minutes of play in Friday’s matchup against Utah Valley, the Cats shot for only 21 percent and were down nine points. After coming out in the second half and switching to Calipari’s rare zone defense, Kentucky had multiple steals resulting in an 18-0 run.

“At halftime I said, ‘this is good for us, let’s see who we are. Let’s see who’s willing to fight,” Calipari said. “We went zone and it kind of got us going.”

Kentucky gave up an early three points in the second half before they went on that 18-0 run from minutes 18:59-15:37. In those few minutes, Kevin Knox and Wenyen Gabriel had five points each, while Hamidou Diallo and Shai Gilgeous-Alexander both added four.

The Cats had a five-and-a-half minute period where they didn’t allow a field goal.

“I think we’re a really good zone team, we’re really long and athletic, so we can cover most of the spots,” Diallo said.

With his previous teams, Calipari hasn’t used a lot of zone defense, and doesn’t plan to use it much more in the future. He says, “I have a responsibility to teach these kids how to play pick-and-roll defense, how to stay in front of people, man to man. From here on out there is no zone. They’re gonna have to learn.”

According to freshman Nick Richards, the Cats try to play as much man as possible, but the zone worked for them in this game.

“It’s what got us through a 18-0 run in the first couple minutes of the second half. The zone is effective, but it’s not what we’re really known for,” Richards said.

In addition to their change in defensive measures, the Cats’ shooting improved drastically in the second half as well. They shot 60 percent on 19-32 shooting, including 43 percent from the three.

The energy and loudness of the fans in Rupp Arena also attributed to UK’s second half success.

“That’s probably the loudest I’ve heard it in Rupp and I’ve been here since January,” Diallo said.

As for Nick Richards, he says the “dunks, turnovers and the crowd getting them hype” were the turning points in the second half.

Although it certainly worked for tonight’s game, as for the Wildcats’ zone defense, fans probably won’t be seeing much more of it as the season goes on, per Calipari.

Kentucky is back in action this Sunday at home against Vermont. Tipoff is at 3:30 p.m.