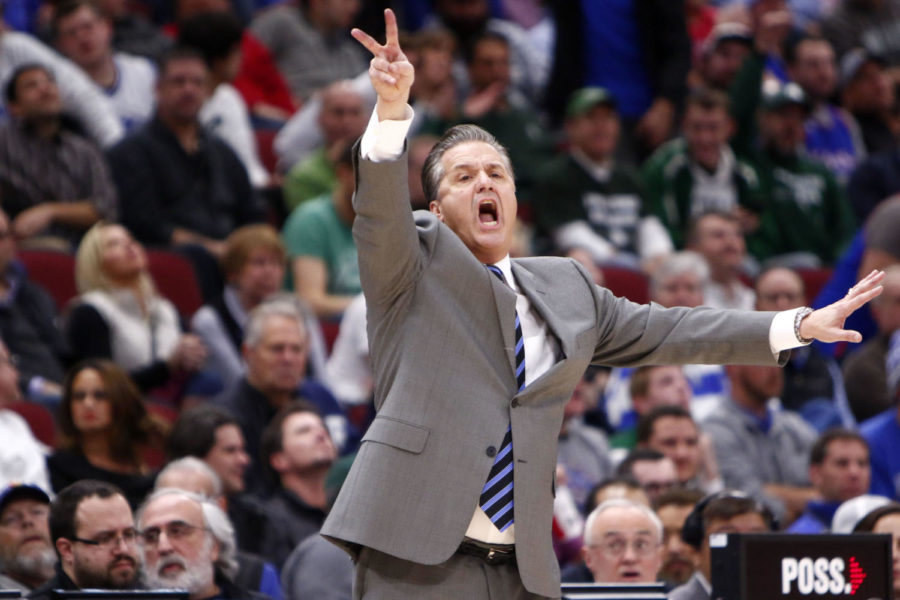 Head coach John Calipari of the Kentucky Wildcats yells at his team during the game against Kansas on Tuesday, November 14, 2017 in Lexington, Ky. Kansas defeated Kentucky 65-61. Photo by Carter Gossett | Staff

There are many things the UK basketball team needs to work on before March Madness, but first and foremost, head coach John Calipari wants to figure out what to do in late game situations.

The Cats were presented with a late game situation on Tuesday night against Kansas, when the two squads were tied at 57 with 3:15 remaining. In that final 3:15, Kansas would pull away with an 8-4 run that gave Kansas the extra push they needed to win.

As much as the Cats wanted to win that close game, they still don’t know what to do when presented with such an opportunity.

“I still don’t know how we’re going to play late in a close game,” Calipari said.

The Cats went 2-7 in that final 3:15 while turning the ball over once. Many mistakes were made in those final moments, Calipari said, and one way he thinks UK could limit future mistakes is to relax a little during the game.

“I’m trying to get them to think less and play more and just worry about competing,” Calipari said. “We haven’t worked on late game situations, we’re still working on slide, stay in front of people.”

Despite the mistakes, UK still had a chance to win the game with 33 seconds left when they got the ball back, down two. Since the Cats haven’t worked much on late game situations, the best play Calipari could draw up was give the ball to Kevin Knox and give him a chance to score.

Knox was able to get up a baseline floater, but the shot didn’t fall. Malik Newman rebounded it and was intentionally fouled, where he made both of his free throws, virtually sealing the game.

In this young season, Knox has looked like one of the players capable of taking the final shot. However, since this was only UK’s third game, Calipari wasn’t sure how that possession would end.

“He probably wasn’t ready for that, and I just said, ‘We’re throwing it to Kevin and you get a shot,’” Calipari said.

Even though he missed the game-winning shot, Knox is still confident that this team could be good with more work.

“If we keep playing like that later on in the year, we going to be really good,” Knox said.

If this team wants to be really good, they’ll need to learn how to pull away in a close games, especially when opponents like UCLA and Louisville take the court against the Cats.

When Calipari finally figures out how the Cats will finish games, that could be a big step this team takes to becoming a true contender.

“I just got to figure out how do we play with four minutes to go, who do I have on the floor,” Calipari said. “This is going to be a process of hit or miss, see what we like when if it works, we’ll all know that’s what they should be doing.”