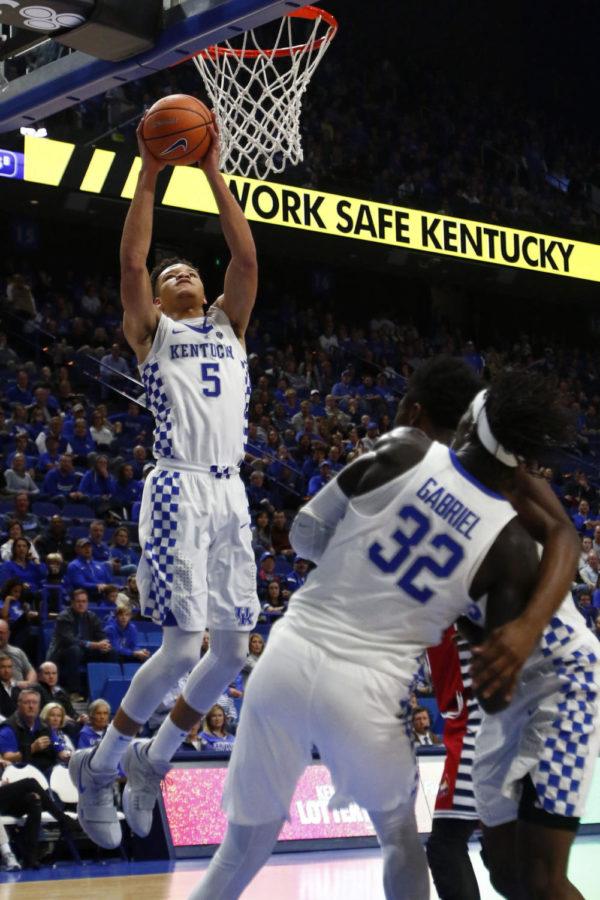 Freshman forward Kevin Knox lays the ball up during the game against UIC on Sunday, November 26, 2017 in Lexington, Ky. Kentucky won the game 107-73. Photo by Hunter Mitchell

After a game stocked full of career-highs and season records, UK basketball ended Sunday evening with a 107-73 victory over the University of Illinois-Chicago.

The team’s offensive play seemed to be UK’s strong suit, as the Cats shot 66.7 percent from the field, making it the second-highest shooting percentage of the John Calipari era, trailing only 67.7 percent versus LIU-Brooklyn on Nov. 23, 2012.

“That’s by far the best we’ve played. We were efficient, we passed the ball, we made shots, and we took one bad shot,” head coach John Calipari said. “Short of that, I don’t think we took a bad shot. They were all good shots. They didn’t all go, but they were good shots.

Kentucky recorded a season-high 107 points, which is its first 100-point game since Jan. 3, 2017, against Texas A&M. The 34-point victory margin was also the highest of the season.

The Cats had six players score in double figures, which included all five of their starters, plus Shai Gilgeous-Alexander.

Kevin Knox, Kentucky’s leading scorer of the game, scored a career-high 25 points, continuing his streak of scoring double figures in every game this season. Despite his impressive offensive game, it was the first game that he has not made a three-pointer.

“I get to the basket, post-up, hit mid-range shots, like Cal said, I did a really good job with just being able to find open spots and being able to get in the post and score early baskets in the paint,” Knox said.

“I feel like we were making everything tonight. We just played great as a team and we got the ball moving. We also had some great stops on the defense,” said P.J. Washington, who tied his career highs with 17 points and four assists.

Kentucky credits some of its offensive success to the 22 assists to 15 turnovers ratio.

“Like I said, everybody was kind of clicking tonight. We had multiple guys in double figures, so with that happening I’m pretty sure we’re going to have a lot of assists,” Knox said.

The Cats are looking forward to a two-day break and seven days of practice over the next two weeks to get better and work on areas that need improvement.

Story: More practice time on the schedule for UK

“I feel like we get better every game. We just have to come out there, keep competing, and keep working hard in practice, that’s what it’s all about,” Diallo said.