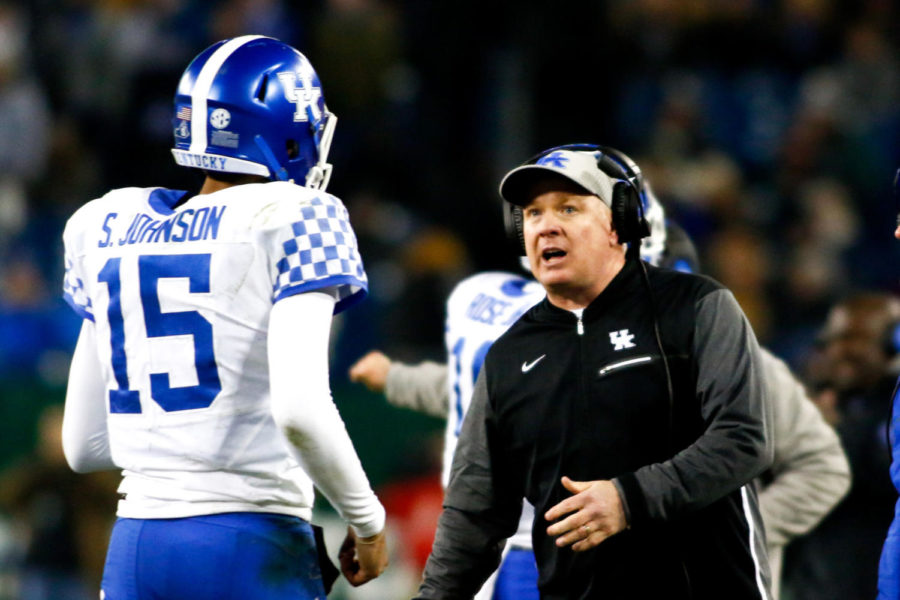 If I told you four months ago that the 2017 UK football team would finish 7-6, you would probably be disappointed.

If I told you that the team blew the game against Florida, was blown out by Louisville and lost by one-point in the bowl game, you would probably be disappointed.

However, as Kentucky’s season came to an end in the Music City Bowl, where the Cats were two points away from an eight-win season, I am having a hard time finding disappointment.

Sure, the losses to Florida, Ole Miss and Northwestern were hard ones, but in those losses, and in a lot of UK wins, the Cats did the one and only thing you can expect a team to do, and that’s give 100 percent.

“I’m proud of this season, proud of these guys,” head coach Mark Stoops said after the loss to Northwestern. “Sure, there’s a lot of heartbreaking losses in there that you look at that as either a glass half-empty or half-full.”

Even though the result of the Music City Bowl didn’t end in favor of the Cats from Kentucky, they still gave 100 percent in the toughest situations, evening after seeing their star running back get ejected in the second quarter and facing a halftime deficit of 10.

“Everybody was very confident that we’d go out and put ourselves in a position to win the game and give ourselves an opportunity,” Stoops said.

No other member of the football team better represents the ideology of giving 100 percent than Stephen Johnson. Johnson led five game-winning drives during his short time at UK, and was a two-point conversion away from his sixth.

Johnson would attempt this comeback after injuring his AC joint in the second quarter. Johnson would come back in the second half to rush for two touchdowns in an attempt to deliver to UK fans what they wanted the most for Christmas, which was a bowl game win and an eight-win season.

“He’ll always be remembered for that, for his toughness and his guts and his determination,” Stoops said.

However, sometimes things don’t work out, and Johnson’s two-point conversion pass to Tavin Richardson was incomplete as the pass went through Richardson’s fingers. This sealed the fate on Kentucky’s quest for an eight-win season.

Should the fans be disappointed this team wasn’t able to accomplish eight wins? Absolutely. Kentucky had a favorable schedule and let a couple mistakes determine the outcome of three of their losses.

However, should the fans be disappointed in the team? Absolutely not.

While they were not able to accomplish their goal of eight wins, the Cats gave 100 percent in nearly every snap they played, and that’s all you can ever ask for from college football players. Mistakes happen, and watching the fight and effort the Cats displayed in the Music City Bowl should make fans feel pride instead of disappointment.

The losses to Florida and Northwestern will sting, but the feeling of pride towards the team should far outweigh any feelings of negativity.