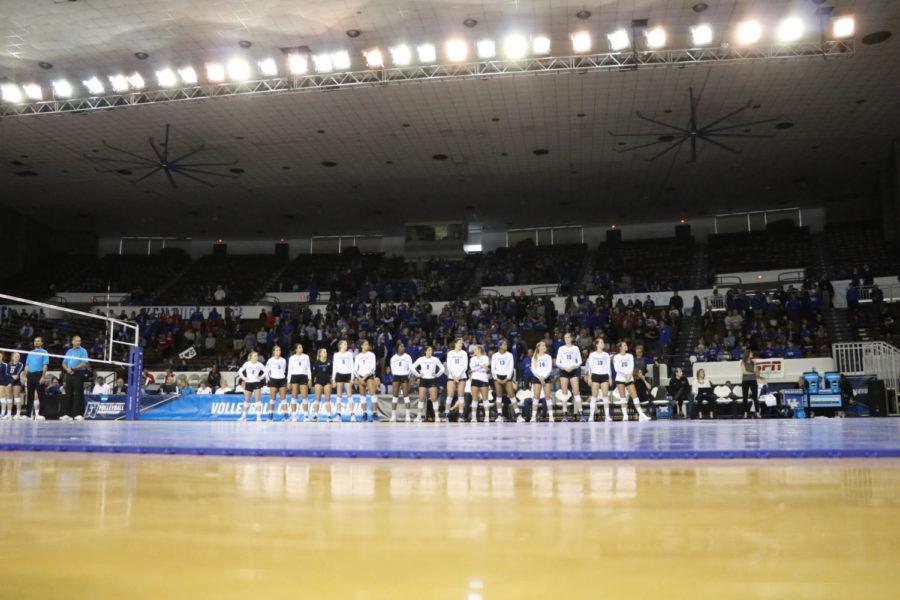 Kentucky waits for player introductions before the match against BYU on Thursday, December 7, 2017 in Lexington, Ky. Photo by Chase Phillips | Staff

A spot in the Final Four is up for grabs, and No. 4 seeded Kentucky and No. 5 Nebraska will compete for that spot on Saturday afternoon in Memorial Coliseum, starting at 4 p.m.

The Cats earned their place in the Elite 8 after defeating BYU in a five-set series. Meanwhile, the Huskers swept Colorado in three sets.

Under head coach John Cook, the Huskers went 19-1 in Big Ten conference play, finishing second behind No. 1 Penn State. They are led by junior Mikaela Foecke, who leads the team in kills, averaging 3.43 per set, and senior Annika Albrecht, who is right behind with an average of 3.06 kills per set.

“Nebraska is a heck of a program and have been really good for 30 years, even before John Cook. John took it on even to another level,” UK head coach Craig Skinner said. “I have a lot of respect for John, and John gave me two opportunities to coach in this business and allowed me to have an opportunity to get a head coaching job at Kentucky. So, I personally owe that program a lot and have a lot of respect for them and wish them a lot of luck in the next match.”

The Cats are led by different players every match, but Leah Edmond leads the team in kills, hitting 4.51 per set. She also broke the 500 kill mark for the season high in the past game against BYU.

With the special group of Kentucky volleyball players, Cook understands what it is going to take to defeat this team.

With No. 4 facing No. 5, there is strong competition on both sides, but only one can win and advance further into the tournament.