Shai Gilgeous-Alexander is emerging as UK basketball’s next star 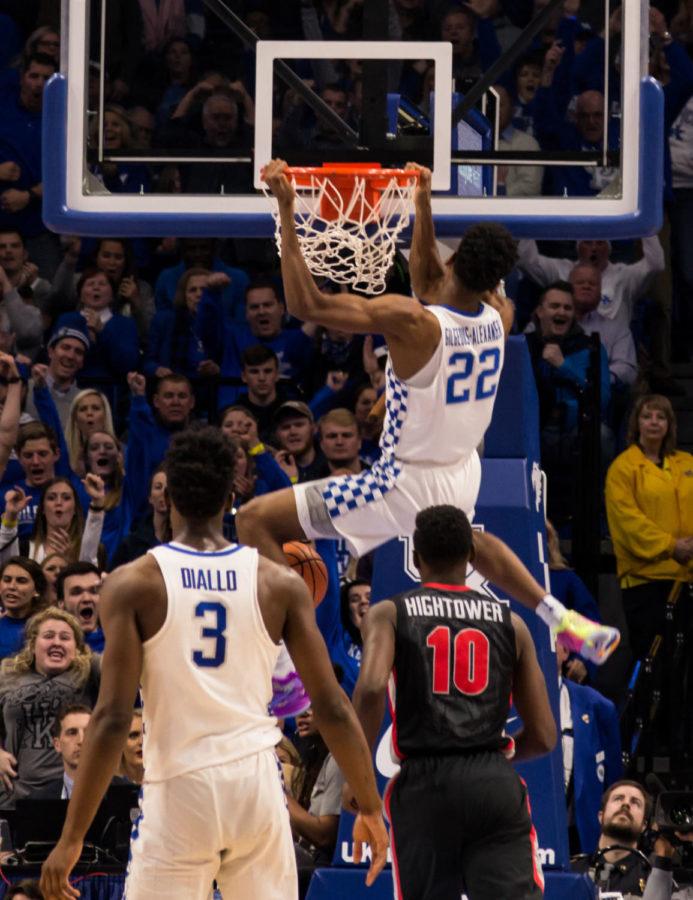 Since his big haircut less than a week ago, UK basketball guard Shai Gilgeous-Alexander has been a man possessed.

Over his last two games, he’s averaged 22.5 points, five rebounds, four assists and three steals, as well as shooting 17-19 from the free throw line. His performance against Georgia on Sunday proved that his domination against Louisville was no fluke.

Shooting 4-9 from the field, including a three-point dagger to give UK the lead with less than five minutes remaining, Gilgeous-Alexander dropped 21 points on the Bulldogs. He went to the free throw line numerous times and capitalized on his opportunities, shooting 12-13 (92 percent) against Mark Fox’s team.

“…Like I said after, he’s our best player. I said the greatest thing about him, he’s coming off the bench and not saying anything. Don’t worry about his shots or anything, he’s just playing. Smiles the whole game,” said UK head coach John Calipari.

However, don’t think that this will be cause to put Gilgeous-Alexander in the starting lineup. The Cats have surged when the Canadian guard comes on the court after time has passed in the game, and Calipari has said repeatedly that he “just likes” when Quade Green starts because of the rotations.

When asked why he’s been so stellar the last two games, Gilgeous-Alexander has attributed his performance to extra film time.

“I watch film a lot lately,” Gilgeous-Alexander said. “After the UCLA game, I realized there were spots where I left the defense off the hook and stuff like that where I could’ve attacked them and put pressure on them. I’ve just tried to take advantage of that in these last two games.”

Gilgeous-Alexander has been ferocious on the defensive end, grabbing three steals in each of the last two games, including a pivotal on-ball takeaway that ended in a dunk against Georgia.

The star also said he wasn’t too worried about his head coach calling him the best player on the team, because he knows that Calipari will put the entire team “in a position to be successful.”

Gilgeous-Alexander will have a chance to prove himself next at LSU on Jan. 3 at 8:30 p.m.