P.J. Washington has breakout game after Calipari calls it 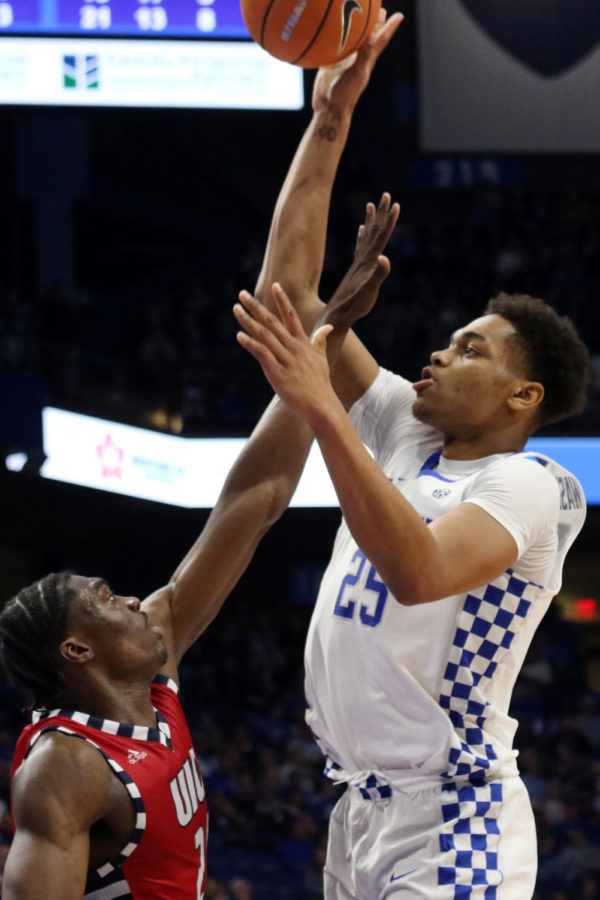 Freshman forward PJ Washington shoots the ball over a defender during the game against UIC on Sunday, November 26, 2017 in Lexington, Ky. Kentucky won the game 107-73. Photo by Hunter Mitchell

You may have heard this before, but John Calipari was right.

Less than 48 hours before the Kentucky basketball team played Monmouth in New York City, head coach John Calipari said P.J. Washington was having a good week of practice and could be due for a big game.

Washington followed that prediction with his best game as a Cat against Monmouth, scoring 20 points along with securing six rebounds and one block. He was a big reason why Kentucky was able to defeat Monmouth 93-76.

Washington’s scoring total was a career high for the freshman.

Washington got off to a hot start, scoring 16 of his 20 points in the first half.

Washington has had a handful of rough games before Saturday’s performance, only topping the double-digit point mark three times in his young UK career. Washington also has the ability to be turnover-prone, as he had at least four turnovers in four of his first five games.

However, in his last four games, Washington has only turned the ball over four times, including just twice against Monmouth.

Another area where Washington showed improvement was shooting, which is what Calipari said Washington has improved the most on in recent days.

Washington shot 5-9 from the floor against Monmouth, including 9-9 from the free throw line. That’s the most free throws Washington has shot and made all season after averaging 46 percent from the charity strip before Saturday’s game.

Calipari noticed the improvements in shooting throughout this week’s practices and made note of it during his pregame press conference. Calipari is confident that Washington will be able to continue to grow as he figures out how to play on the college level more.

“He’s just started, he’s doing things he hasn’t done, and he’s doing them for the first time,” Calipari said in a press conference before the team played Monmouth. “He’s building his own confidence.”

Along with Washington, Hamidou Diallo also had a big game, scoring a career-high 23 points in his return to New York, his home state.

Diallo is from the Queens, and this was his first time playing Madison Square Garden in his basketball career.

The Cats will have another week before the take the court, as their next game is Dec. 16 against Virginia Tech. Tipoff is schedule for 2 p.m. at Rupp Arena.