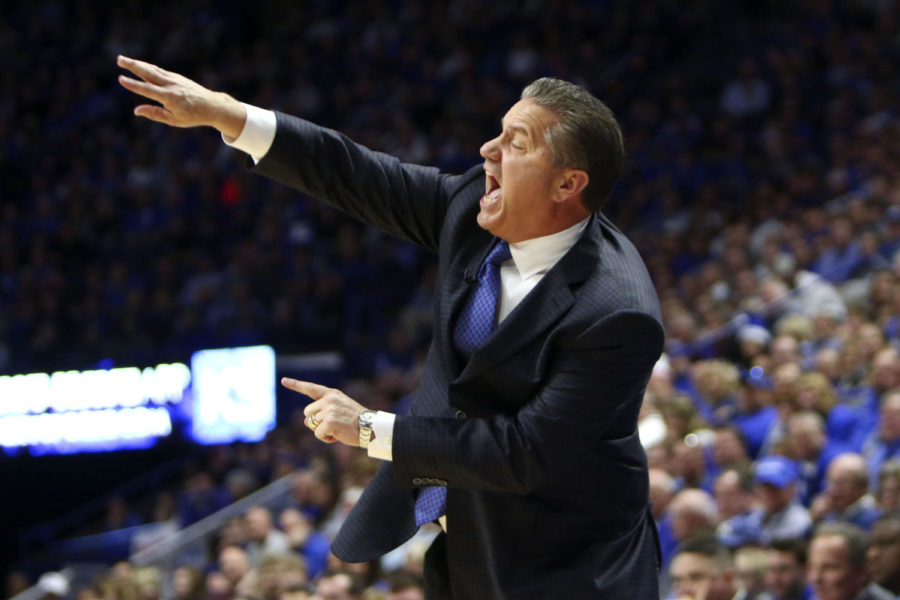 Head coach John Calipari of the Kentucky Wildcats screams at his players during the game against Harvard Saturday, December 2, 2017 in Lexington, Ky. Kentucky defeated Harvard 79-70. Photo by Carter Gossett | Staff

Time and time again this season, fans have watched the Kentucky men’s basketball team build big leads against weaker opponents, then let them back into the game before the final buzzer sounds.

In an effort to stop such instances from happening, head coach John Calipari has been tough on his players in practice, even if he does not want to be.

“I don’t want to be the guy that has to go crazy to get them to compete and play, cause if I am, that means they’re real close to letting go of the rope,” Calipari said. “When we get in a game and it’s really hard and the other team is giving it, that’s when that team – they let go of the rope.”

“Letting go of the rope” is what Calipari said happens to the team when they let opponents back into games in the second half. A reason why it happens is mostly due to fatigue, which hasn’t necessarily been fixed since many players cramped up at the Blue-White scrimmage.

Calipari said that at one practice in particular this week, he was tough on his players, and their heart rates and effort went up. Calipari thinks that if it takes intense coaching for the players’ heart rates to go up, that’s a problem.

“If I’m the one that has to get them to do that, they’re not getting this, and I told them that,” Calipari said.

However, Calipari isn’t necessarily surprised the Cats have this problem with a team full of freshmen, as most of the players haven’t been in a situation similar to Kentucky basketball.

“They’ve never gone this hard, they’ve done what they’re doing right now, which is 45 days of practice, academics, tutoring, travel, all the stuff, playing in games, having all this social media out there that they’ve never had before, dealing with all the stuff they’re dealing with, it wears you down,” Calipari said.

It’s because of this that Calipari still believes that this team could turn into a national title contender. Once the Cats improve their fitness and start buying in as a team, Calipari thinks the Cats will turn the corner.

“I think this team wants to be special, they just – they thought they could do it easily and they’ve figured out now, ‘Oh my gosh, this is really going to be hard,’” Calipari said.