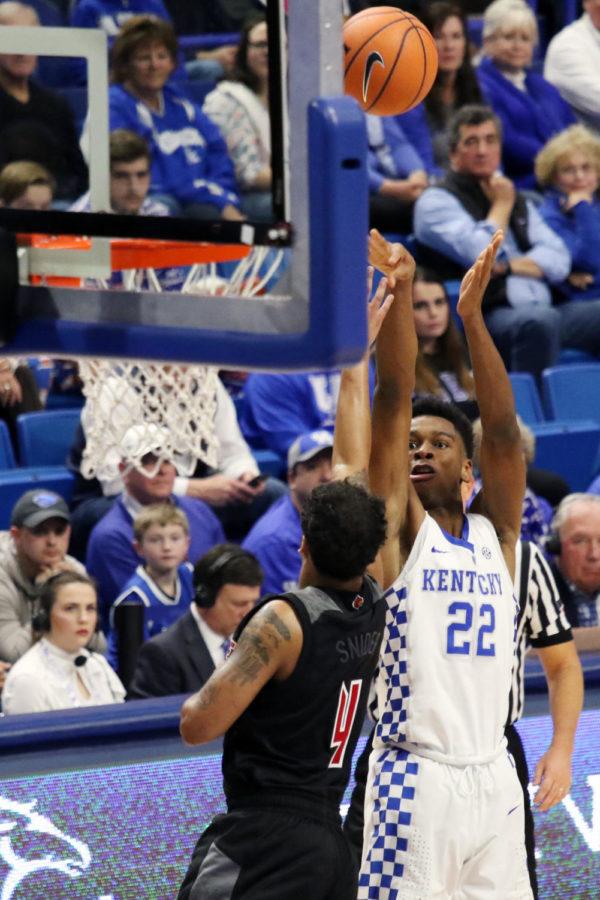 Freshman guard Shai Gilgeous-Alexander shoots a ball during the game against Louisville on Friday, December 29, 2017 in Lexington, Ky. Kentucky won the game 90-61. Photo by Hunter Mitchell.

On what is the most important day of the year to much of Big Blue Nation, the basketball game against in-state rival Louisville, Shai Gilgeous-Alexander took a big risk sporting a new haircut for the game.

If his play had caused Kentucky to lose, Wildcat fans from far and wide would have been looking for the fastest hair-growth hormones they could find. However, the hair was cause to celebrate after a career day from Gilgeous-Alexander as the Cats dominated the Cards 90-61.

“I knew it was coming,” said Gilgeous-Alexander after being asked his first question by the media if the game was because of his new haircut. “I guess you could say that. I just felt good going out there and I knew a big game was coming.”

Gilgeous-Alexander finished the day with a career-high and game-high 24 points. He also was able to pull down five rebounds and dish out four dimes while only having one turnover, earning him Most Valuable Player honors for the game.

He was also spectacular on the defensive end, finishing the game with three steals in his 33 minutes of action. He shot 9-16 from the field, 1-2 from behind the arc and 5-6 from the free throw line. The team also outscored Louisville by 35 with Gilgeous-Alexander on the floor.

John Calipari didn’t believe that the haircut had anything to do with Gilgeous-Alexander’s performance, but something else he wore today did, his smile. “That kid smiles. I don’t know what it is, but every Canadian who I’ve coached has fun and smiles and doesn’t feel the weight of the world on them.”

Calipari went on to add that the players are 18 and 19 years old, so you can expect some of them to shrug their shoulders when they miss shots. “But Shai, he just plays.”

The Wildcats needed someone to shine today, as one star did not have a great outing against the Cardinals. Kevin Knox was unable to reach double digits for only the second time this season, finishing the game with 8 points. Knox ended up fouling out after he was in foul trouble for much of the game, logging a season-low 17 minutes.