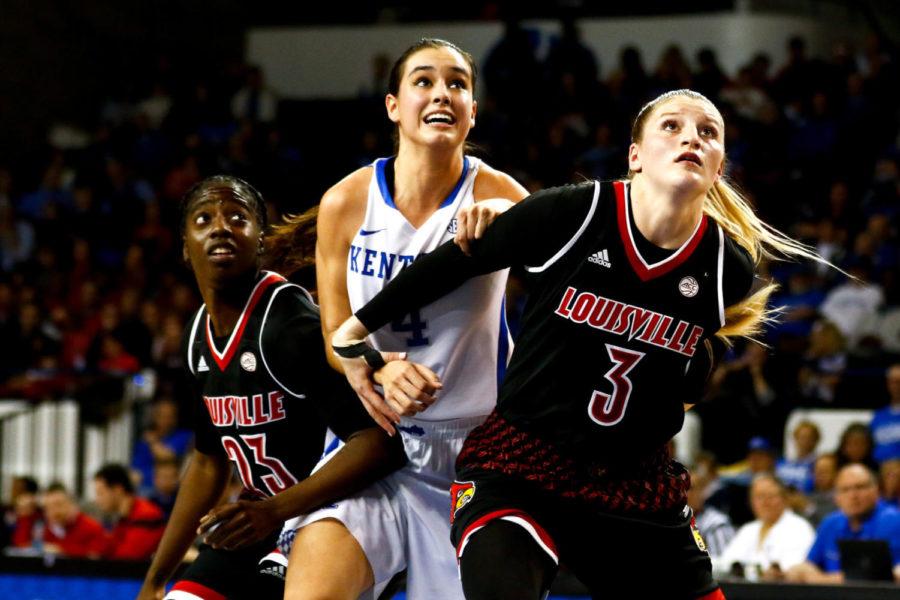 A sloppy offensive performance filled with turnovers and a lack of rebounds for Kentucky led to the Cats’ 87-63 downfall to the Louisville Cardinals on Sunday afternoon. UK is now 8-4 for the season.

The Cardinals started off the game with pure speed and precision, holding Kentucky scoreless while they made seven points with ease. These points were a result of three turnovers from the Cats.

After a slow start by both teams in the second quarter, UofL’s offense began to trample over the Cats as the Cards went on back-to-back runs. At one point, Louisville scored eight points in 80 seconds, causing Kentucky’s head coach Matthew Mitchell to call a couple of timeouts.

The first half of the game was not looking pretty for the Cats, as they didn’t make any field goals for the last 3:23. The only points they scored during that time was two free throws from Maci Morris and one from Taylor Murray.

Coming out of halftime, Louisville scored four quick points, which put the Cats in a deeper hole. Jaida Roper was not happy with UofL’s quick start, so she answered at the other end with a three-pointer, and that’s where her exciting few minutes began.

Following up with her three-pointer, she had an impressive assist and a drive to draw a foul. She made both of the free throws.

Foul trouble came into play again for the Cats, which has been one of their biggest struggles this season. KeKe McKinney and Alyssa Rice both finished with four fouls, causing McKinney to only play eight minutes.

The Cats began to look better offensively, as they made six straight field goals halfway into the fourth quarter. Morris turned on her turbos and scored nine points, but that wasn’t enough to save the game.

Kentucky couldn’t stop their sloppiness, giving free throws and easy buckets to the Cardinals, and this was the cause of their downfall. Louisville outrebounded the Cats 36-25.

Morris ended the game with 16 points and five rebounds, while Tatyana Wyatt had 10 points and Roper with nine points. Rice and Murray had eight points, while Murray had seven rebounds and seven assists to end the game.

Kentucky’s next game will be Thursday, Dec. 21, in Lexington against the California Golden Bears.