Stoops: UK football in an “exciting and busy time” 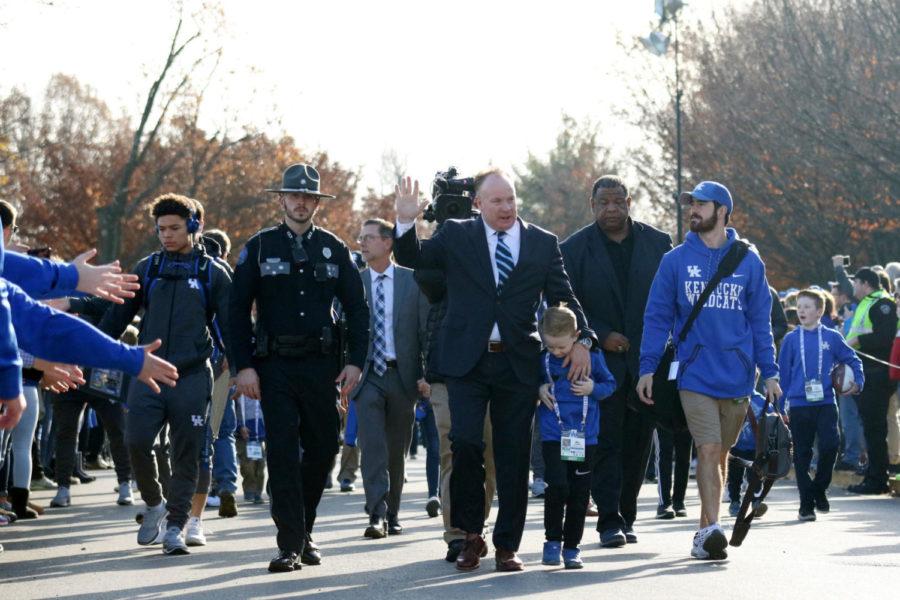 UK Head coach Mark Stoops waves to fans during the Catwalk prior to the senior day game against Louisville on Saturday, November 25, 2017 in Lexington, Ky. Louisville won the game 44-17.

During preparation for the Music City Bowl on Dec. 29, in which the Cats will take on Northwestern, UK head football coach Mark Stoops took a few moments Tuesday afternoon to discuss the upcoming game, among other topics.

“Excited about the opportunity to play in the Music City Bowl and honored to play Northwestern,” Stoops said. “I have great respect for Pat Fitzgerald and for Northwestern. They’ve played some very good football.”

“I think you just got to have a lot of respect for Pat (Fitzgerald) and what he’s done and the way they’ve played and I know they’ve won, I believe seven in a row, and three of them with some very close games,” Stoops said. “To win that many in a row, you’re doing something right.”

“I’ve known Northwestern for a while playing in the Big Ten, and having some familiarity with the Big Ten teams,” Stoops said. “They’re always very well balanced and I know they can throw the football and they’ve been very stout with their run defense.”

Stoops also touched on the fact that there is a lot changing in college football right now, especially in the SEC.

“It’s been a crazy year, I appreciate where I’m at and the stability I have here in this program,” he said. “In our league, as you know, there’s a lot of turnover, and there’s a lot of my close friends that won’t be with me in those meetings this year.”

According to Stoops, his stability within the program helps when it comes to recruiting. He says he often reiterates that to players when he’s recruiting, because some of them have been “very close to some guys that have been let go.”

“It is nice to say that ‘Hey, you don’t have to worry about that,’ and that I do have a new contract and I’m greatly appreciative of that,” said Stoops.

With the bowl game coming up at the end of this month and the new early signing date in a few weeks, Stoops and the rest of the football program are going through an “exciting and busy time right now,” he said.