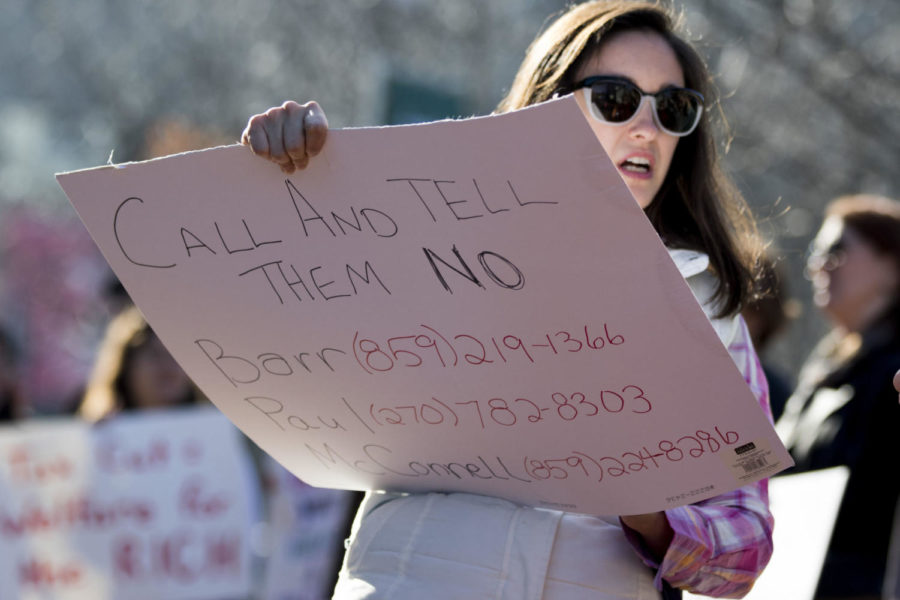 Lexingtonians gathered at Triangle Park in downtown Lexington, Kentucky to protest the Tax Cuts and Jobs Act that was passed the morning of Saturday, December 2, 2017. Photo by Arden Barnes | Staff

A small contingent of community activists quickly gathered for a “pop-up” protest in Triangle Park on Saturday afternoon to vent their frustrations over the early-morning passage of the Republican-backed tax bill.

With Lexington’s official Christmas tree behind them, protesters stood at the intersection of Broadway and Main St. to show their signs to passing traffic, and debate with passing UK basketball fans on their way to Rupp Arena.

Julia Martinez is the chair of Together We Will Bluegrass, a group of local community activists who have recently merged with Indivisible Bluegrass−a different activist group.

“I got up this morning and said, ‘This is not OK and we’re going to protest it today,'” Martinez said of the almost-500 page Tax Cuts and Jobs Act which narrowly passed through the Senate Saturday morning in a 51-49 decision.

According to a New York Times report, Kentucky Republican and Senate Majority leader Mitch McConnell said it was, “a great day for the country.”

Martinez said that McConnell had a heavy hand in the bill’s passage, which makes the bill a big concern for Kentuckians.

“Mitch McConnell is our senator,” Martinez said. “(A)nd as the Senate majority leader, he was the one who really ramrodded this through, and as a Kentuckian I’m ashamed of that.”

Amendments were added to the bill late last night and were voted on this morning, The Times report said. Many Senate Democrats took exception to the fact that many of them were unable to read through the changes before the vote was held.

“As an American, you should not be OK with how they passed this bill, because it’s not the way that we should handle legislation,” Martinez said. “Whether you’re in the majority or minority parties you should have the opportunity to read through it thoroughly.”

The controversial tax on tuition waivers for graduate students that is included in the House Bill, was not included in the Senate bill, American Council on Education President Ted Mitchell said in a statement.

The provision that could potentially harm graduate students was protested on UK’s campus earlier this week.

Trent Garrison, an NKU professor and communications chair for the activist groups said that the House bill could still harm graduate students.

“There’s the House bill and the Senate bill, and that’s going to have to be reconciled,” Garrison said. “And that’s why we’re out here today, to let people know that there is still work to be done, and we’d obviously prefer (the bill) that doesn’t tax graduate students as much.”

In a Friday statement, Jay Blanton said that UK President Eli Capilouto would be traveling to Washington next week to discuss the grad tax, and other issues with elected representatives.