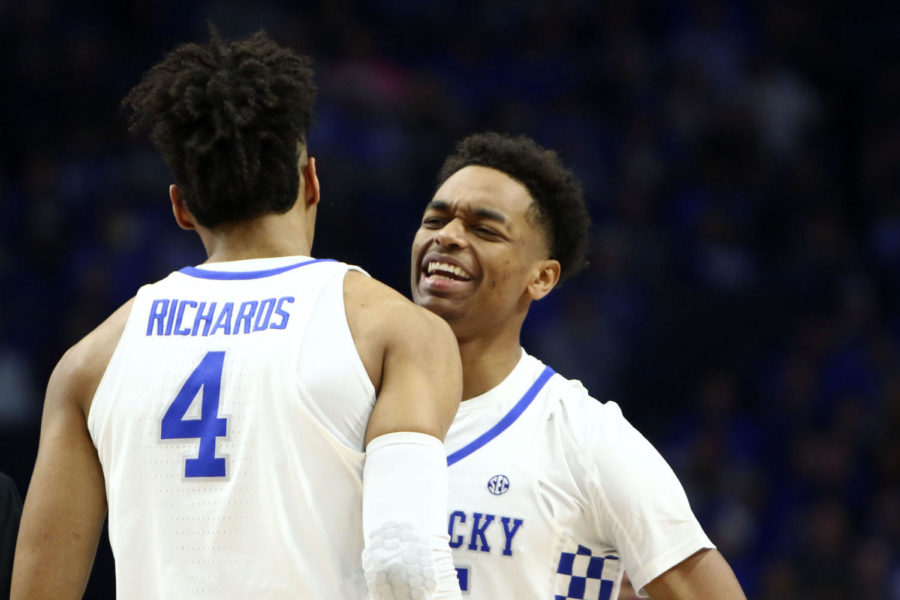 Just a couple weeks removed from the highly-touted loss against Kansas in the United Center, UK basketball went to Madison Square Garden in New York City Saturday and dominated the Monmouth Hawks, outscoring them 93-76.

From the opening tip, the game entirely belonged to the Cats, as guard Quade Green threw a lob to fellow guard Hamidou Diallo, who finished in the lane. UK would go on to never trail in the game, eventually leading by nearly 30 at one point.

Production in this one also came from unlikely source, as star forward Kevin Knox struggled. Knox only scored four points on 1-10 shooting, so other players had to step up. Knox didn’t make his only field goal until there were less than six minutes in the game, as he hit a three to make the score 81-57.

Those players ended up being Diallo, Shai Gilgeous-Alexander and forward P.J. Washington. The trio combined for 56 of the Cats’ 93 points, as well as seven assists and 15 rebounds. Washington went the entire first half without missing a shot, including going 7-7 from the free throw line.

The only major early drawback for the Cats was their foul trouble, as center Nick Richards picked up three early fouls, and the team put the Hawks in the bonus with 11 minutes left in the first half. They then employed a zone defense that cut down on the UK foul trouble.

UK’s length and athleticism was also a massive problem for the Hawks, as the Cats won the rebound battle 47-33. They forced the Hawks into a 36.6 shooting percentage from the floor by swatting away six shots, including two during their first defensive possession.

Shortly after halftime, point guard Quade Green was hit in the right eye by an opponent while running to grab a rebound, which removed him from the rest of the game. He was taken to the locker room shortly after his injury and came back with his injured eye swollen shut as he sat on the bench.

The Cats didn’t have much of a hold-up with Green out, as they continued producing at a high level with Gilgeous-Alexander on the floor.