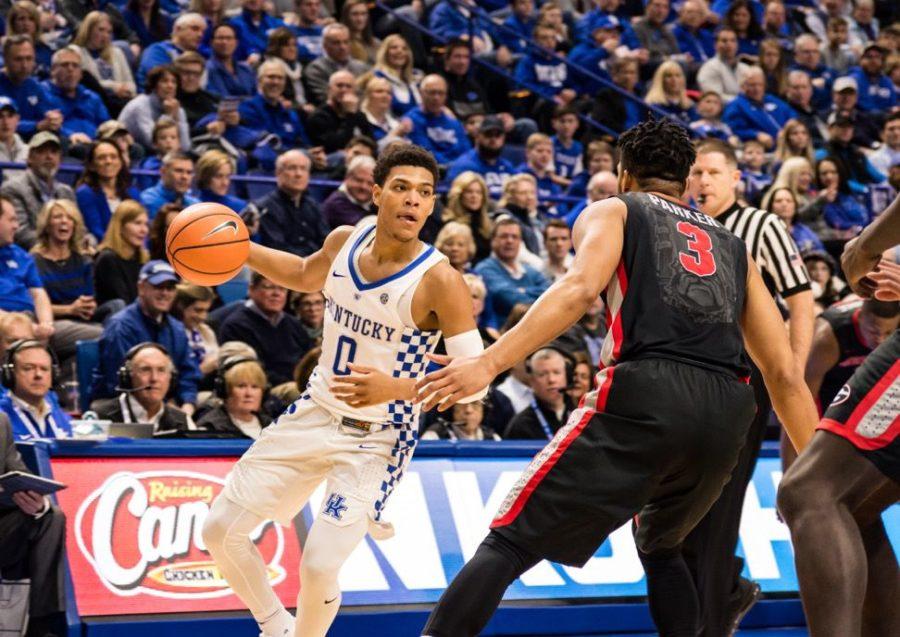 Freshman guard Quade Green moves the ball down the court and tries to line up for a shot at the basket. Sunday, December 31, 2017 in Lexington, Ky. Photo by Edward Justice | Staff

2017 might have come to an end on Sunday evening, but Kentucky basketball opened the conference portion of its schedule and started it with a win as the Cats defeated the Georgia Bulldogs 66-61

The Cats didn’t pull away from Georgia until late in the second half. Kentucky never held a lead larger than three until Wenyen Gabriel hit a three with 1:08 remaining. That gave Kentucky a six-point lead, which was its largest of the game at the time.

Shai Gilgeous-Alexander would tack on a free throw on the next possession, and Georgia was never able to overcome the deficit.

The Cats didn’t even take their first lead of the second half until the 7:49 mark. They would retake and keep the lead for the remainder of the game with 4:39 remaining after Gilgeous-Alexander knocked down his first three of the game.

After Gilgeous-Alexander scored a career-high 24 points against Louisville, the freshman would score 21 more against Georgia while also collecting five rebounds and four assists. Gilgeous-Alexander also went 12-13 from the free throw line, which was a career high.

UK’s free throws helped balance out a rough day on offense for the Cats. Kentucky finished the game shooting 31 percent. UK only made 21 percent of its shots in the first half, and only lead for 1:39 of that time.

The offense also had a hard time overcoming foul trouble, as P.J. Washington and Nick Richards both picked up two fouls apiece 2:48 into the game. UK’s guards took over the game from that point, as Quade Green scored 13 of his 15 points in the first half.

Gilgeous-Alexander also had seven points at halftime to be UK’s second leading scorer at the break.

Kentucky’s defense also helped save the rough day on offense, as it only allowed Georgia to make two of their 21 attempted three-pointers. Yante Maten did the most damage to the Cats, achieving a double-double with 17 points and 12 rebounds.

Kentucky will continue its SEC schedule at LSU next, as the Cats will face the Tigers on Jan. 3 in Baton Rouge, Louisiana. Tipoff is at 8:30 p.m.