UK looking to improve defense and energy against UofL 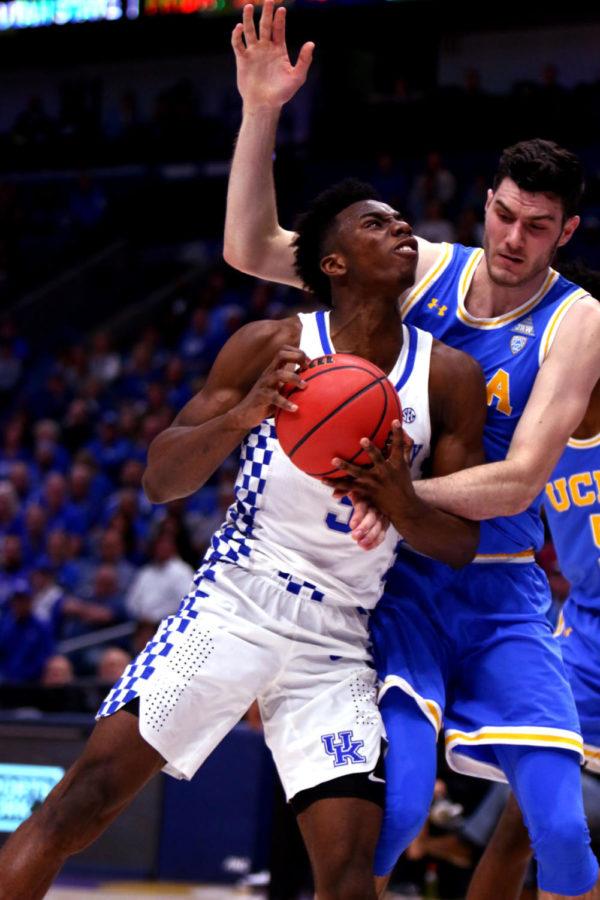 After falling to the UCLA Bruins in New Orleans last Saturday, the Kentucky basketball team is looking to tighten up its perimeter defense heading into the matchup against Louisville.

Kentucky gave up 12 three-pointers in its 75-83 loss to UCLA, good for 40 percent from the field. UCLA joined Harvard and Fort Wayne as the only other two to make 12 three-pointers against Kentucky, tying the season-high in threes allowed by the Cats.

The Bruins are also the third team this season to shoot at least 40 percent from three-point range against Kentucky.

“I felt like it was a bad game for us all. A lot of mistakes and a lack of intensity,” said redshirt freshman guard Hamidou Diallo, who had a team-high 18 points against UCLA on Saturday.

Louisville, who is 10-2 on the season, is shooting 36 percent from three-point range as a team this year.

Diallo, who didn’t arrive on UK’s campus until two weeks after Kentucky’s loss at Louisville last year, said this game is no different than any other game for the Wildcats.

“Every game’s a big game. We’re on a national stage, and every team is going to play their best game versus us. So, it’s going be another war and we’re going to have to go out there and compete and not stop fighting,” Diallo said.

Sophomore forward Sacha Killeya-Jones says there’s “no excuse” for the Cats to not play a complete game on Saturday.

“I think for the stretches we played with the desperation and intensity we had, but not for the whole game. I think we need to learn how to play for 40 minutes like that, and if we can put together a 40-minute game like we do for seven or eight minutes at a time, then that’s where we really get dangerous,” said Killeya-Jones, who tied the team-high in steals with two against UCLA, despite playing just six minutes off the bench.

Head coach John Calipari says that this year’s team, similar to last year’s, has a couple guys who are “not desperate enough” on the defensive end.

“We had no aggressiveness. We showed (the team) the 12 threes (UCLA) made, and they didn’t guard them,” Calipari said when addressing the media Thursday afternoon.

Kentucky is currently ranked 143th in all of Division 1 basketball with 70.5 points per game allowed, while Louisville is ranked 37th in the nation with 64.6.

The Cats will tip off against Louisville at 1 p.m. tomorrow on CBS.