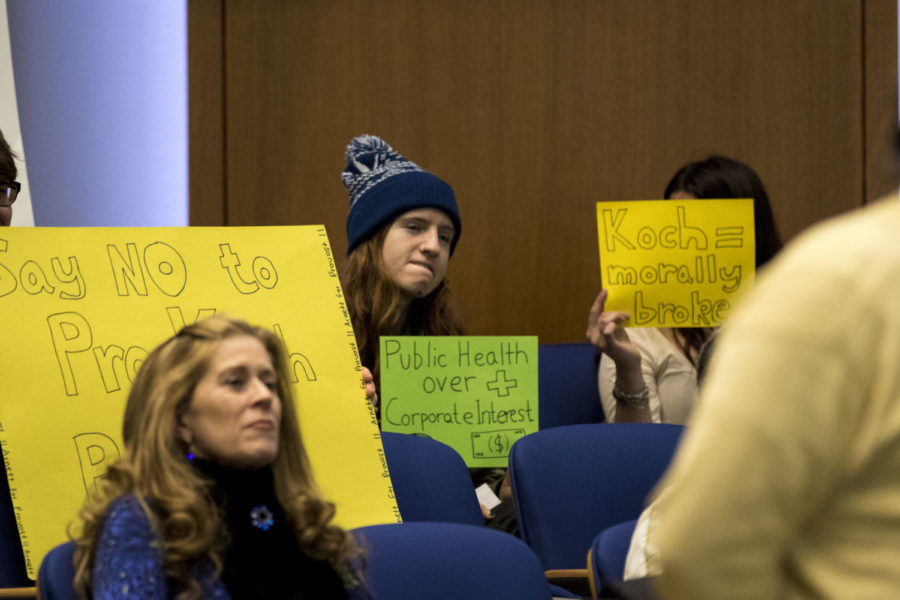 Graduate students held signs up in protest of provost candidate David Blackwell while he spoke to students, faculty, and staff in Kincaid Auditorium on Friday, December 8, 2017 in Lexington, Kentucky. Photo by Arden Barnes | Staff

Students attended the open provost forum of David Blackwell on Friday afternoon to oppose his candidacy for provost and peacefully protest his involvement in UK’s acceptance of Charles Koch Foundation funds.

Blackwell is currently the dean of the Gatton College of Business and Economics, which accepted a donation from the Koch brothers, who are well-known for their pro-free market political views. Their $4 million donation helped fund the John H. Schnatter Institute for the Study of Free Enterprise.

About 10 students attended the forum together to show their opposition to Blackwell, said Cameron Baller, a natural resources and environmental science junior.

“It was an inter-organizational effort. I was informed by an organizer friend of mine of the history of Dean Blackwell, and I was immediately concerned with the potential of him becoming provost,” Baller said. “So I coordinated with other organizers that I know are influential in terms of student activism on campus.”

None of the students came with an intention to be disruptive, said Nadia Almasalkhi, international studies senior. Almasalkhi asked the first of three questions during the Q&A portion that concerned the Koch money.

Each of the three questions are transcribed below, along with Blackwell’s response.

“You mentioned several times during your remarks about the importance of finding sustainable sources for funding. Under your oversight, the Gatton college accepted a multi-million dollar donation from the Koch Foundation, which has been known to use its monetary influence to influence the content taught and professors hired in economics departments, particularly in order to promote free market, anti-regulation economics. Do you see a problem with the involvement of politically motivated interests in public universities, and how would you as provost protect academic freedom?”

“Thank you. So there are a number of premises behind that question that I won’t address specifically, but let me say a bit about the nature of the gift that the Gatton college received from the Koch Foundation– and from John Schnatter, by the way, who is a prominent citizen of Kentucky.

“First, the gift that we received is not to promote anything other than honest, scientific inquiry into the impact of free enterprise on society. Embodied in that, largely, is the study of how certain government policies might affect economic well-being of a society. As long as the faculty involved in that institute are practicing standard, intellectually honest research practices, subjecting that research to peer review in our best journals and achieving that kind of success, and then hosting events that really open up the discussion to both sides of any kind of issue related to economic freedom, and that are honest and that are transparent, those all are consistent with the goals of the Gatton college and the goals of the University of Kentucky.

“In general, I don’t ask the political affiliation of a donor when they write a check to UK. Politics really has nothing to do with it, and it happened in the case with the Koch brothers– yes they are involved in politics, I agree. But they’re doing a lot of good work apart from economic freedom. They’re studying efficacy of health-care policy, they’re supporting research on crime and appropriate punishments for various sorts of nonviolent crimes and other issues that cut across society more broadly.

“So I think as long as we at UK handle the gift appropriately and protect our own academic freedom, that’s all I can guarantee. I think we’ve done a good job with that institute so far. If you care to go look at their website, there’s a link to every event that we’ve hosted and to every paper that has come out of that fund, and you’ll see that it’s very scientifically vigorous and not politically slanted at all.”

“One thing that I think is really important for a provost is a lot of trust between the faculty and the provost, and that relationship. And I kind of want to go back to the deal with the Institute for (the Study of) Free Enterprise with the deal with Papa John and the Koch brothers, and whether you want to say or not, they are highly politicized donors. You may not look into the political leanings of donors when you accept them, but they are highly political donors. That deal was incredibly controversial; in fact, the faculty senate voted not once but twice against that deal, and so my question for you, is what is your plan to develop trust with the faculty when you’ve already had a deal where you went against the wishes of the faculty in terms of the education of students?”

“I will address the question in this way: One, at every step of the process, I engaged faculty in our college and in the economics department. I was very transparent about what was coming, got broad support from our college, which is primarily where the impact of this gift is, and so within our college, there was some controversy, we discussed the issues, we made some compromises, we made some joint decisions about how the institute would be administered, and then I think that the results have spoken for themselves so far. I think if you ask any number of colleagues on the faculty of the Gatton college, that they would say in balance that the institute has been a positive force in the college.

“Beyond that, I very early on in the process involved the university senate leadership, even inviting them to listen in on our faculty members, on our faculty meetings as we deliberated. We went through the normal senate process– it was very rigorous, there was a lot of heated discussion, and it was all out in the open and out in the press. We agreed to some oversight that was actually beyond the normal oversight that would be provided on other centers and institutes that are similar. I’ll just characterize that we had a very transparent process, went through all the normal processes.

“I want to start out this whole question by acknowledging that this is only a little over an hour time, that you’ve got so much that you want to say and thus can’t go into the specifics of words like synergy, innovation, and collaboration, only so much. So I want to acknowledge that. But you claim that the Koch money does not affect the day-to-day operations here. If we’re going whether that is actually the case, because arguments can be made for both sides, to me, the acceptance and use of that money can indicate a sign of where the university’s mentality is at, and acceptance or at least complacence with their heavily political goals of gearing curriculum in a particular way in order to turn out students for the betterment of corporations, which to me, seems like treating students as a means to a particular end for corporations and universities, as opposed to treating the students as ends in themselves. And so there’s that, and some of your language concerns me. You talked about the state of higher education needing to focus on returning on investments, which the Koch foundation just did, and you also mentioned us needing to use our resources as best as possible to achieve the overall objective, and so going back to words like synergy, collaboration, innovation, to me—”

[At this point, an unidentified audience member interrupted and said “Ask your question.”]

“Thank you. Those words could easily be filled with actions that use students as a means to an end, and so getting to my question, what is the overall objective for the university that you want to achieve?”

“My vision for this university is for us to be recognized as a world-class university, and the path to that success is not only on great outcomes for our students, but also great support for our great faculty, both in the teaching and in the research realms, and also growing and investing in the faculty and the research enterprise, and you know, the programs in smart, meaningful ways.

“We’re in a great position, we are on a path to world-class status, and we can’t let any of the challenges we talked about get in our way. I think we have to be creative and innovative and find our own way. And with respect to you, Seth, it would take me an hour and a half to unpack the preamble to your question and address it, and we don’t have time for that today. But if I’m in the role of provost or not, I’d be happy to take you to lunch and we can talk about all the issues you raised.”

Gadbois, who is a fifth year senior earning a dual degree in psychology and philosophy, said Blackwell’s remarks did not change his mind.

“I think that we all wanted to have an open mind for what he did have to say, and after what he did say, I still feel the same,” he said.

After the forum ended, Blackwell approached Gadbois and assured him that his offer of a discussion over lunch was sincere.

“It is refreshing to have students come to an event like this and feel comfortable expressing their views, and they did it in a very respectful fashion,” Blackwell said after the forum. “Completely appropriate for them to ask the question, so I just want the public to know that I appreciated that.”

Blackwell said that a university is exactly the place for those who disagree with each other to engage and discuss issues in a “civil fashion.”

“That’s what happened today, so I’m proud of those students,” he said.

Almasalkhi said she felt she and her fellow students accomplished their goal at the forum. In addition to asking questions, several of the students held up signs that said things such as, “Say no to pro-Koch provost.”

“I think it’s pretty unfortunate that some of the other audience members didn’t appreciate these kinds of questions and openly interrupted and were disparaging toward the students who were raising their honest concerns, but I think we have reached our goal,” she said. “I think everyone here understands that students are concerned about this, and I think we all made our point very respectfully.”

Baller considered it problematic that these forums were held during dead week for students, meaning finals were just days away. He said the scheduling of the forums is indicative of a rushed process, since current Provost Tim Tracy’s announcement that he was leaving came suddenly.

“It is very important that we have meetings during times that students are not the most busy in the semester,” he said  “It is unreasonable to expect students to show up only during dead week.”

He said the administration should not make this decision over winter break, when students are not here “to advocate for themselves.”

Currently, no date is known for when President Eli Capilouto will announce the next provost.

The recap of Blackwell’s forum can be read here, while the report of the other candidate, College of Public Health Dean Donna Arnett, is found here.