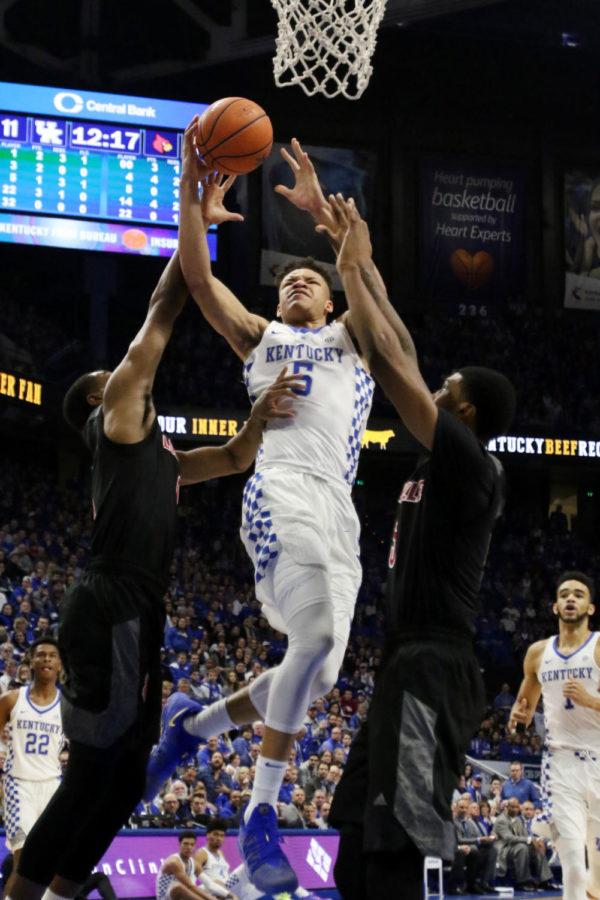 Freshman forward Kevin Knox is fouled on the way up for a layup during the game against Louisville on Friday, December 29, 2017 in Lexington, Ky. Kentucky won the game 90-61. Photo by Hunter Mitchell.

Against LSU, Kevin Knox was able to break out of his two-game slump as he finished with 16 points and 11 rebounds, his second double-double of the season.

That was the first time since the UCLA game on Dec. 23 that Knox finished with double-digit points. However, Knox wasn’t thinking about scoring when he took the court against LSU; he was thinking about defense and rebounding.

“Last game I came out focusing on defense and rebounding and I think eight rebounds in the first half,” Knox said.“If I can just focus more on defense, focus on the team and not focus so much on offense I think that’ll help out the team so much.”

One thing that helped Knox have that mindset in the game was a recent change that the freshman underwent in practices. Head coach John Calipari revealed on Friday that Knox is no longer practicing with the guards, and is instead practicing with the forwards.

Calipari’s hope for Knox is that he will turn into a big game who can shoot the ball. Calipari also wants Knox to focus more on driving to the basket, something he’s wanted the freshman to do all season.

“Just to be more aggressive and go to the goal more, rebound more, play like a forward who can really shoot,” Calipari said of his goals for Knox.

However, Calipari doesn’t want to take Knox off the three-point line completely, as Knox leads the team in three-pointers made. Instead, Calipari wants Knox to keep his skillset as a guard and add some big-man moves in the process.

“You’re not trying to break old habits, you’re trying to create new habits where they’re in situations and this is how they react,” Calipari said. “You have to put them in those environments daily to get them to react they way you want them to react.”

If practicing with the forwards is what it took for Knox to break out of his funk, then the freshman likely won’t mind the change at all, as he’s said many times this season he just wants to do whatever it takes to make the team better, and not particularly himself.

Knox and the rest of the Cats will have a big test on their hands on Saturday when they travel to Knoxville to face No. 23 Tennessee. Tipoff is at 9 p.m. ET.